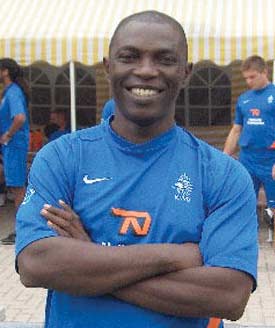 Former Super Eagles’ player, Edema Fuludu, has said that the Nigerian football coaches association is not as strong in the national level as ought to be.

According to him, some states’ football associations are stronger than the national body.

Fuludu, who is the Vice Chairman, Delta State Football Association, recently obtained the CAF B Licence in Abuja and he   explained that it is only in Nigeria that a coach can just stroll in and start working without recognising the association, in tandem with international best practices.

Speaking in an exclusive interview with AOIfootball.com, Fuludu bemoaned how Nigerian coaches are being hired and fired at will, and how they take up jobs without contracts.

“A coach can come into this country and pick a job without recognising the coaches association. It is high time the association tackles this anomaly and set criteria for coaches at a different levels.

“As a coach, you must belong to the group and nobody should come into this country as a foreigner and just take up a job without recognising the Nigeria football coaches association,” concluded Fuludu.