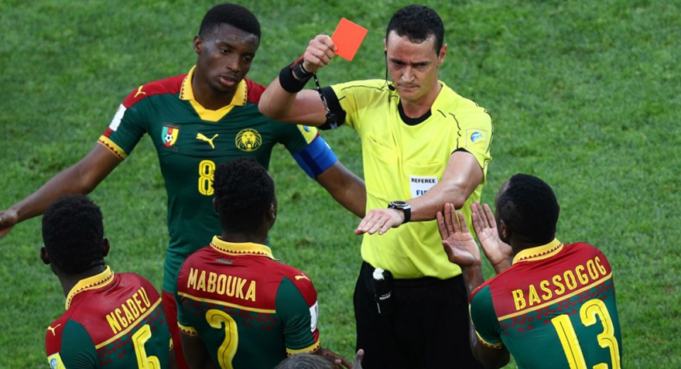 World Champions Germany on Sunday at the ongoing FIFA Confederation’s Cup showed Nigeria’s Super Eagles how to handle African Champions Cameroon when a second string side sent the Indomitable Lions packing from the tournament with a 3-1 bashing.

Hugo Broos’ side second loss in the FIFA Confederations Cup means they have been bundled out of the competition.

Cameroon’s Ernest Mabouka was shown a straight red card in the 64th minute.

Germany took the lead in the 48th minute through Kerem Demirbay.

In the 67th minute Germany went 2-0 up through Timo Werner.

Vincent Aboubakar pulled a goal back for Cameroon to bring the score to 2-1.

But in the 82nd minute Werner got his second goal to secure the win for Germany.

The last time Cameroon failed to make it out of the group stage of the Confederations Cup was at their debut at the 2001 edition co-hosted by South Korea and Japan.

In the group’s other game Chile also booked their place into the semifinals after drawing 1-1with Australia.

James Troisi opened the scoring for Australia on 42 minutes before Martin Rodriguez equalised for Chile on 68 minutes.

With the results, Germany finish top of Group A on seven points and will
face Mexico in the second semifinal on Thursday.

While Chile who finished second with five points will take on Portugal on Wednesday.