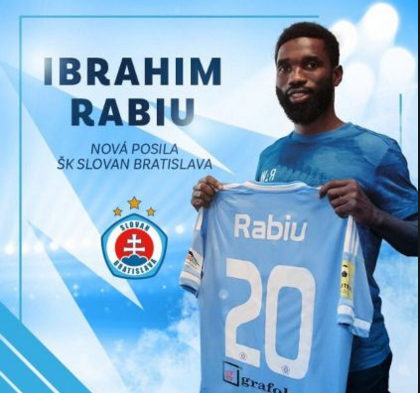 Nigeria international, Rabiu Ibrahim has been unveiled by Slovak club, ŠK Slovan Bratislava following a move from Belgium’s K.A.A. Gent. He will wear jersey number 20, AOIFootball.com can report.
The 26-year-old was signed for one million euros. The former PSV and Celtic midfielder signed a four-year contract and has become the biggest incoming transfer in the history of the domestic league in Slovakia. No player has come to the Slovakian League for a higher amount.
“I am very happy with the transfer to Slovan. After the season I had different options, but clearly I decided to go to Slovan. First of all, I have to work hard for the team and fight for a place in the starting line-up. I have high ambitions – winning matches and trophies, ” said Ibrahim Rabiu.

FIFA Rankings: Nigeria climbs to 38th in the world