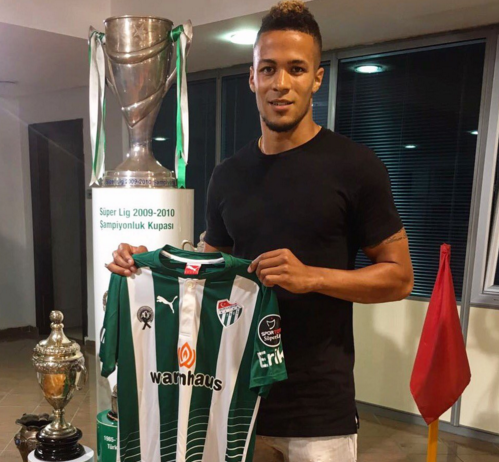 Super Eagles of Nigeria defender, Williams Troost-Ekong has shown his auspicious appreciation to fans of Belgian outfit, KAA Gent after leaving to join Bursaspor in the Turkish Super Lig, AOIFootball.com can report.

Troost-Ekong, 23, who joined Gent in July 2015, has moved to Turkey in search of regular first-team football.

The defender played the 2015/16 season on loan at Norwegian club FK Haugesund, but only made eight appearances for Gent last season.

He started his career with the Tottenham Hotspur’s youth side in England before returning to the Netherlands to join Groningen in 2013 and played on loan at Dordrecht.

He was also a former Netherlands youth international before switching allegiances to represent the Super Eagles of Nigeria.

He made his debut for Nigeria in 2015 against Chad republic.

Troost-Ekong won Olympic football bronze with Nigeria at the 2016 Rio Games and has 10 caps for the Super Eagles.

“I would like to say a big thank you to all the fans of @KAAGent for supporting me in my short time with the club. I enjoyed playing in front of you in the Ghelamco Arena. I wish you all the best the coming season in the league and playing in Europe. Thank you Buffalos!