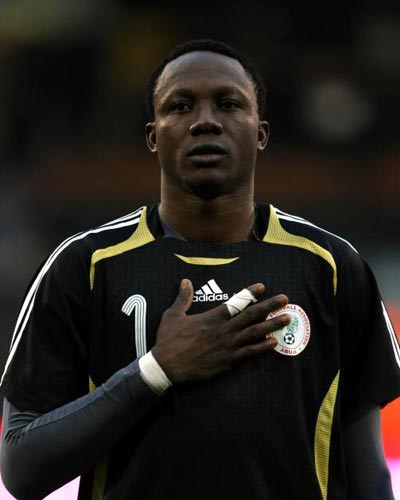 Estranged Super Eagles’ goalkeeper, Dele Aiyenugba, has said he will jump at the slightest opportunity to feature for the three-time African champions again.
It’s already five years since the 33-year-old featured for Nigeria after the shocking 2-2 draw against Guinea in Abuja in November 2011 confirmed the Super Eagles’ failure to qualify for the 2012 edition of the Africa Cup of Nations hosted in Gabon and Equatorial Guinea.
Eagles’ failure to play at that tourney, however stalled his continuous call-up to the national team.
But the Hapoel Ashkelon shot-stopper has revealed he would be ecstatic if the national team handlers look his way again.
“Wow! I’ll jump at the slightest opportunity to play for my country. Nigeria is my country and I always feel fulfilled whenever I play for her. I’m so eager to play again,” Aiyenugba told AOIFootball.com exclusively.
The former Enyimba goalie also pointed out that he has garnered more experience which synonymously is a going thing for goalkeepers as they are said to be better with age.
“I’m a better player now. I have learnt so much between the sticks and playing consistent club football. You know goalkeepers get better while aging,” he concluded.
Aiyenugba has featured 17 times for the Super Eagles.