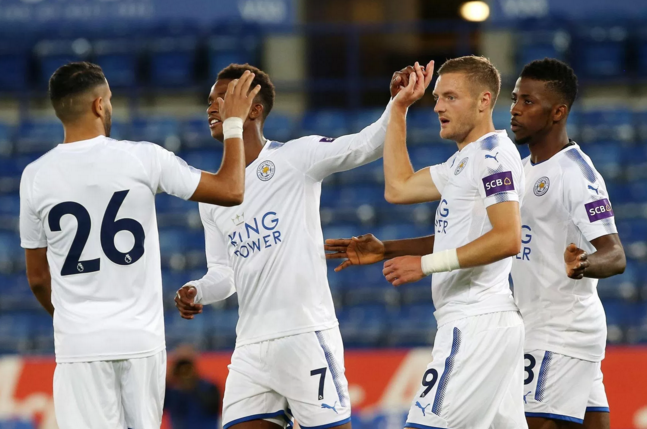 Super Eagles striker Kelechi Iheanacho marked his debut with an assist as Leicester City came from a goal down to beat Bundesliga club Borussia Monchengladbach 2-1 in the Foxes’ last pre-season game on Friday at the King Power Stadium.

A brace from Jamie Vardy cancelled out Monchengladbach’s lead scored by Thorgan Hazard.

Iheanacho, who started from the bench before replacing Shinji Okazaki in the second half, however had to be replaced by Leonardo Ulloa after picking up a suspected injury.

Wilfred Ndidi who was in Leicester’s starting line-up, was later replaced by Vicente Iborra, while Ahmed Musa was benched throughout the game.

After a goalless first half, Monchengladbach took the lead in the 46th minute after Hazard smashed in a right-foot effort from 18 yards.

In the 67th minute, Leicester were back on level terms thanks to Vardy who brilliantly controlled a pass from over the top before coolly putting it past the Monchengladbach keeper.

Vardy grabbed his second goal to put Leicester 2-1 ahead on 74 minutes after finishing off Iheanacho’s assist following superb build-up play.

Leicester will kick off the 2017/2018 Premier League campaign with a trip to the Emirates to face Arsenal next Friday.