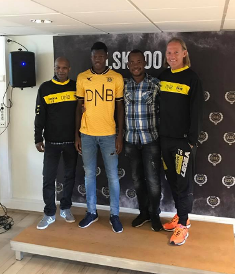 Moses is described as a moving point, and according to Lillestrøm, the newcomer is looking forward to getting started.

“Lillestrøm is a good club and there has been very good training,” said the 20-year-old, who played a game in the fight against Sarpsborg 08.

The Eliteserie Club also said it was pleased with the signing of Moses.

“Moses will have plenty of time to develop with us. What he has shown on the training so far is very good and we strongly believe he will be a very good player for LSK,” said Sports Director, Torgeir Bjarmann.

Eagles arrive Kaliningrad, to have feel of stadium pitch on Friday evening