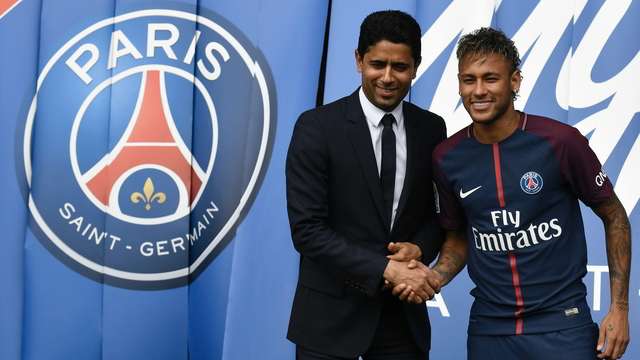 Former Super Eagles captain Austin Jay Jay Okocha has likened his trickery during his playing days to that of Brazil’s Neymar.

Okocha, whose exceptional displays at the 1998 World Cup in France made Paris Saint-Germain splash $17m for his services making the most expensive Nigerian player at the time , told FIFA.com that the new PSG No.10, who also cost the French club a staggering $222m this summer, is the heir to the throne of world football.

“I’d say the player whose style most resembles mine would be Neymar. That’s because I played with a sense of joy and you can see that he feels the same and really enjoys his own play,” Okocha told FIFA.com.

“He doesn’t play for himself or just to entertain the fans – he plays for his team. He uses his quality and skill for the good of the team.

“Yes, I think he will be the one to do it. Messi and Ronaldo have dominated world football for a decade and, given the nature of football, at a certain point the baton will have to pass to someone else. I think Neymar has a great chance of filling that role.”

Okocha also ruled out the chances of an African player making the final three for The Best FIFA Men’s Player Award this year.

He said: “It’s hard to name one at present. If you’re talking about the top tier of players internationally, we don’t consider ourselves good enough to compete at that level.

“We have to change that attitude, and then we’ll be able to produce a player of the stature of the other top guys.

“Anyone aspiring to be the best, or one of the best, needs more than that. You also need to be able to focus, work hard, and be consistent, as natural talent alone is not enough to elevate you to that level. If you understand that, and you have the raw talent, then you can compete at that level.”

Okocha, who made 38 appearances for the Super Eagles of Nigeria, scoring six goals in all FIFA competitions he featured in, picked Messi as his favourite ahead of current world player of the year Ronaldo.

“I have to be diplomatic here, especially as I’ve a lot of Portuguese friends, but I tend to lean towards Messi.

“He’s a more natural talent. Ronaldo is a fantastic player, one of the best I’ve ever seen, but he’s been a bit unfortunate to be of the same generation as Messi. Consequently, they have to share the limelight.”