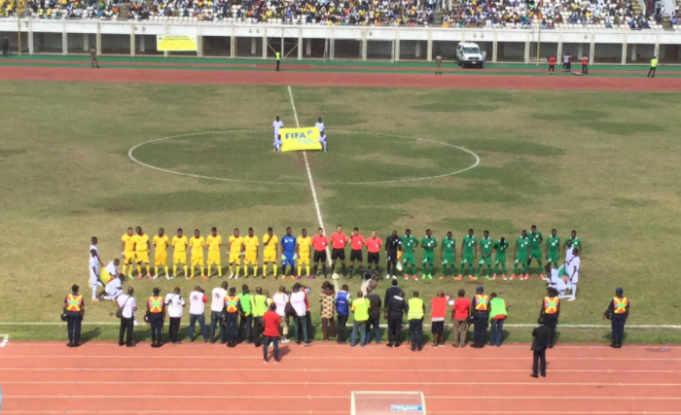 Skipper Mama Seibou scored from the penalty spot with four minutes left to put Benin Republic in the driving seat of their 2018 African Nations Championship qualifying fixture against Nigeria.
Seibou stepped up to slot past Eagles’ goalkeeper and Captain Ikechukwu Ezenwa after centre back Hafeez Aremu fumbled with the ball under pressure and eventually brought down a Beninoise forward.
The host team dominated proceedings in the first half, stringing passes together brilliantly and constantly putting the Nigerian defence under pressure.
After Beninoise goalkeeper Steven Glodjinon caught a pull out by Thomas Zenke and a shot by Chima Akas drifted away, the Squirrels took over, and Marcelin Koukpe could have put them ahead with a header off a free kick, but it went over.
The Squirrels showed ability from dead balls, constantly putting Ezenwa under pressure from such openings. Kingsley Eduwo and Rabiu Ali wasted two opportunities that came the way of the Eagles.
After Alhassan Ibrahim and Stephen Odey came in for Ali and Zenke respectively, the Eagles showed greater potency, and Eduwo should have done better than fluff a pass by Osas Okoro from six yards as Nigeria broke forward in the 66th minute.
Nigeria huffed and puffed, but it was Benin that had the breakthrough with the penalty award four minutes to the end.
Both teams face off in the return leg in Kano on Saturday, with the overall winners qualifying for the finals taking place 11 January – 2 February 2018 in Kenya.