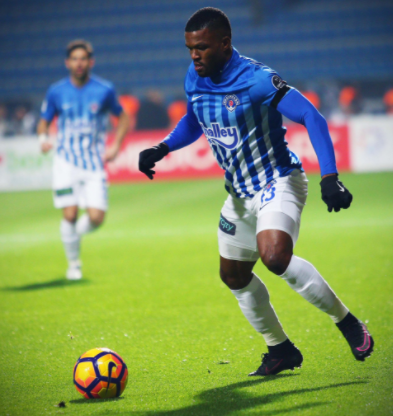 As the European season begins to take shape, Nigerian players are already making their marks, with some of them hoping to be in Gernot Rohr’s list for the double header World Cup qualifier against Cameroon.

We review their performances over the weekend.

SUCCESS ISAAC: Super eagles and Watford FC striker Success Isaac was not listed by manager Marco Silva as the Clarets began their premier league campaign with an entertaining 3 all draw with Liverpool who had Nigerian born England youth player Dominic Ayodele Solanke on the bench for all 90 minutes.

OLA AINA: Super Eagles full back Ola Aina was on for all 90 minutes as his club Hull City FC thrashed Burton 4 goals to 1 in the championship.

The defender grabbed an assist in the match while fellow Nigeria Hopeful Hope Akpan was subbed off in the 71st minute for Burton.

Kelechi Iheanacho, Wilfred Ndidi, Ahmed Musa, Alex Iwobi: Kelechi Iheanacho and Wilfred Ndidi were both fielded by former EPL Champions, Leicester City in their 4-3 away loss to Arsenal. Kelechi came on in the 80th minute and could not make an immediate impact in his official debut for his new side. Meanwhile, Ahmed Musa was not dressed for the encounter. Also Arsenal’s Alex Iwobi was an unused substitute in the encounter on a Friday night that marked the beginning of a new EPL season.

Turkey seems to be the new home of most of our players as it was a mixed performance for some of our stars.

IMOH EZEKIEL: Former U-23 striker and Olympic bronze medalist Imoh Eziekel played 8 minutes for his new club konyaspor has the lost 2 – 1 away to trabzonspor.

The striker was brought on in the 82nd minute but could not stop his side from losing.

Azubuike was on for all 90 minute while MBA was confined to the bench for the host as they won 3-0. Raheem lawal was on for 75 minute as his compatriot was on for the entire duration has they could not prevent Osmanlispor from losing.

SAMUEL EMEM EDUOK: Former under 20 striker Eduok secured all three points for his club Kasimpasa, the one time capped striker for the Super Eagles, came of the bench in the 60th minute and scored five minutes from regulation time as his team beat Alanyaspor 3-1 away from home.

The striker was however yellow carded in the 87th minute.

HENRY ONYEKURU: Super Eagles striker Henry Onyekuru is yet to hit the ground running with his loan club Anderlecht, as they lost 2-0 to Charleroi. The 19 year old was brought on in the 62nd minute but could not salvage a point for his team as they ended up on the loosing side.

UCHE AGBO: Super Eagles defender Uche Agbo was on for all 90 minute as team Standard Liege lost 1 nil to St Truiden in a league match.

TAIWO AWONIYI: Former under 17 world cup winning striker Taiwo Awoniyi continued is goal scoring form from last season when he opened scoring for his team Royale Mouscron as they beat home side Lokeren 2-0.

The striker was substituted in added time to a loud cheer from the away fans.

ABDULJELIL AJAGUN: Former under 20 skipper Ajagun was on for all 90 minute as his club Kortrijk won 2 – 1 over Eupen.

The midfielder however got into the referees book in the 58 minute as he was shown a yellow card for a foul.

JOSEPH AKPALA: Joseph Akpala was on for just one minute as his club Waasland Beveren thrashed Oostende 3-0.

SAMUEL KALU,ANDERSON ESITI, MOSES SIMON: Samuel Kalu was on song for Gent in their 1-1 draw against their host KV Mechelen in the Jupiler league, his fellow Nigerians Anderson Esiti and Moses Simon were only good enough for the bench, as they were not introduced.

EMMANUEL DENNIS, PETER OLAYINKA: The Two Nigerians were on parade as Zulte Waregem entertained Club Brugge, Olayinka nicknamed ‘the EYE’ started for the home side as they lost 2-1 to Dennis’ side.

Former Abuja Fc academy player Dennis, scored the first goal for his team in the 22nd minute before been substituted in the 63rd minute while Olayinka who was wearing jersey number 99 was in action for all 90 minute as his side lost.

It might interest you to know that Dennis is the current top  goal scorer in the Belgium league with 4 goals, he also picked up a booking in the 19th minute of the match.

PAUL ONUACHU AND RILWAN HASSAN: It was a Nigerian affair in Denmark as both Paul and Hassan helped FC Midtjylland to a hard fought 4 – 3 win over Nordsjallend.

Onuachu scored twice in the 45th and 63rd minute respectively while Hassan was the provider for Onuachu second goal, the midfielder was withdrawn in the 74th minute while Onuachu was on for the entire duration of the game, he also picked up a booking in the match.

Super Eagles midfield maestro Ogenekharo Etebo was on till additional minute before he was taken of by his coach as his club CD Feirense played out a drab goalless draw with Moreirense.

SYLVESTER IGBONU: Nigerian striker Sylvester Igbonu’s Russian club FC Ufa lost 4 goals to one to FK Rostov. The attacker was on for all 90 minutes, but couldn’t save his team from defeat.

EFE AMBROSE: Nigerian defender Efe Ambrose was on for all 90 minutes as his team Hibernian shocked big boys Rangers 3 goals to 2 at Ibrox.

Efe who was on target in midweek in a cup game was rock solid for his club side.

JOEL OBI: Super Eagles midfielder Joel obi will hope his injury problem are over ahead of the new Italian season. The midfielder was on target in a Coppa Italia game over the weekend as his club won 7 goals to 1.

Obi who has been impressive for Torino in pre-season having scored 3 goals and grabbed a couple of assist will hope he stays fit and play himself back into the Super Eagles fold.

I told Osimhen I was going to celebrate like Ronaldo when I scored against...