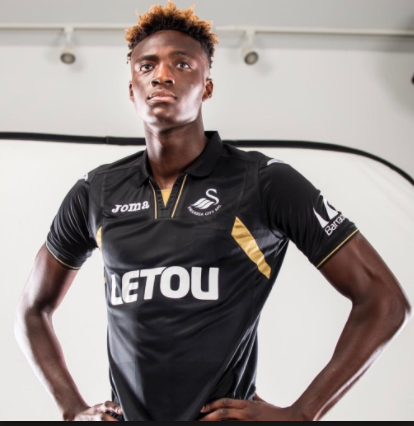 Swansea City boss, Paul Clement is convinced Tammy Abraham will score goals in the top flight after handing the teenager his first Premier League start of his career in Saturday’s opener against Southampton.

Abraham came close to a debut goal as he started for the Swans in their 0-0 draw at Southampton.

The on-loan Chelsea frontman, who scored 26 times during a temporary stint with Bristol City last season, was the Swans’ biggest threat on a day when they were forced to do plenty of defending at the saint Mary’s Stadium.

Abraham headed inches wide after a sweet Wayne Routledge cross in the first half, then saw a second-half shot blocked after a brilliant turn took him away from Jack Stephens.

And Clement was pleased with his new recruit’s contribution on an afternoon where he was often left ploughing a lonely furrow in attack.

“He is a young lad who has very little Premier League experience, but he had a good chance in the first half and I know he is a good player who will do well for this club. He will score goals, I have no doubt about that.

“I took Tammy off at the end because he was tired,  and I know our fans were not happy about that, but I made that decision based on how much our team was suffering,” concluded Clement.