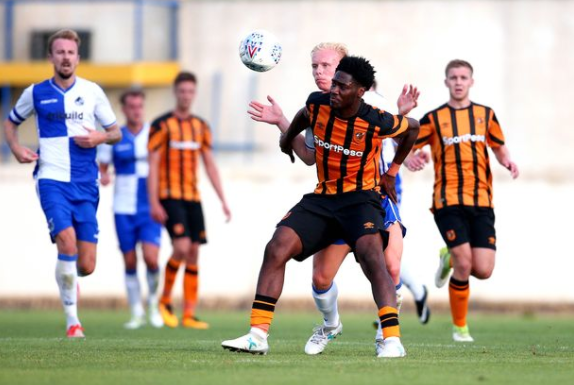 AOIFootball.com understands Hull City right wing-back, Olaoluwa Aina has a 50-50 chance to feature for the Super Eagles when they clash against the Indomitable Lions of Cameroon in the back- to- back 2018 World Cup qualifiers in September.

Aina, who had an impressive debut for Hull in their first win of the season against fellow Championship side, Burton last weekend, is still not eligible to play for Nigeria despite indicating interest to do so in March.

Clear reasons, we gathered, are that his international switch is still being processed, though relative success was recorded in May when the NFF got correspondences well handled by the English FA and then passed it to world football governing body, FIFA.
Further investigations by AOIFootball.com reveal that the process is still on but unconfirmed if the switch will be ready on time before the Nigeria/Cameroon clash.

Those that should know at the Glass House are however optimistic that there could be a miracle for the former England U-19 star to be cleared on time before the game.

The defender had a blistering start to life in the Championship after helping his side to a 4-1 win and also got an assist in the game.