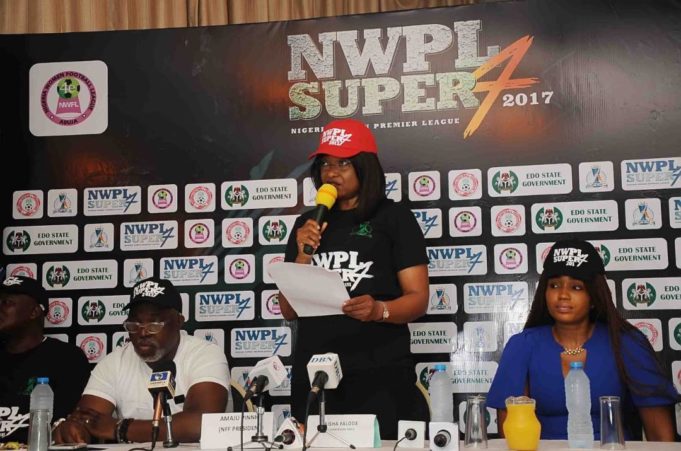 The tournament is billed to take place at the Samuel Ogbemudia Stadium, Benin City from 11th-16th September.

Falode disclosed at the draws that the mini tournament is expected to produce the overall winner of the season.

She said teams that will do battle at the championship include reigning champions Rivers Angels, Bayelsa Queens, Delta Queens and Nasarawa Amazons.

Speaking on the format of the six-day event, Falode said that the tournament will be a round-robbing event with all the four teams playing against each other before the top two will lock horns in the final to determine the overall champion.

Arrival date for the competition shall be 11th September with teams departing Benin City on 16th September.

Falode also used the opportunity to express her gratitude to the government and people of Edo State for accepting to host the championship despite other pressing issues projects on their hand.

“We want to specially thank the Government of Edo State for their remarkable magnanimity in being the gracious hosts for the NWPL Super 4 Championships.

“I’m certain we will have a fantastic tournament with the great facilities in the state,” she said.

The highly rated broadcaster appealed to corporate bodies to always associate with the NWFL brand.

“I want to use this occasion to ask discerning companies, organizations and well-meaning Nigerians to sponsor and associate with the NWFL. I can assure you that this property will give you a remarkable return on investment, significant goodwill and visibility for your brand.

“As this board prepares to actualize its vision of taking the NWFL to greater heights, we cannot pretend that the workload before us is light.

“However, we also realize the considerable responsibility we are tasked with and we realize that a whole generation of youths and women look to us for inspiration, leadership, livelihood and the attainment of their dreams. We will not let them down. We will not let you down!” exclaimed Falode.

The winner of the Super 4 will be N3m richer while the runners up will get N2m.