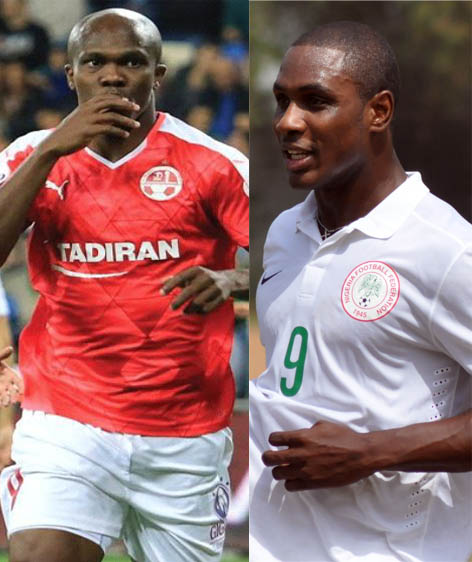 Nigeria’s ex-international, Victor Agali has hinted that the strike partnership between Odion Ighalo and Anthony Nwakaeme will be key for the Eagles when they trade tackles with the Indomitable Lions of Cameroon in Uyo.

Agali who played for Nigeria between 2000 and 2004, told AOIFootball.com that the Super Eagles will need the presence of a physical man upfront against a very physical Cameroonian side and Nwakaeme fits in perfectly.

The much travelled striker also commended Coach Gernot Rohr for inviting the 28-year-old to the national team, stressing that he wondered why the Hapoel Be’er Sheva man had been overlooked by previous handlers of the national team.

The former Shalke and OGC Nice striker said: “The Super Eagles suffered against South Africa because it lacked an experienced and physical striker upfront, and the combination of Ighalo, who has the experience and Nwakaeme’s physical presence will help them to victory.

When asked if Nwakaeme’s inexperience for the national team may be a big factor, Agali said: “No, no! He might not have played for Nigeria before, but this is a man that has played against some of the biggest players and teams in Europe like in the Europa League and Champions League qualifiers. I strongly believe he has what it takes to deliver for the Eagles.

The 38-year-old former Olympique Marseille striker stressed the need for Kelechi Iheanacho to get regular playing time for his club in order to stay sharp for the Super Eagles.

He finally posited that Nigeria’s technical bench must be very wary of FC Porto striker, Vincent Abubakar who hit a hat-trick for his club last weekend.

Agali said: “He is a very fantastic striker, very physical and technical. Our coaches must work on the defenders not to be clumsy with the striker as he may cause some damage.”

Alex Iwobi fit, set to travel with squad to Spain