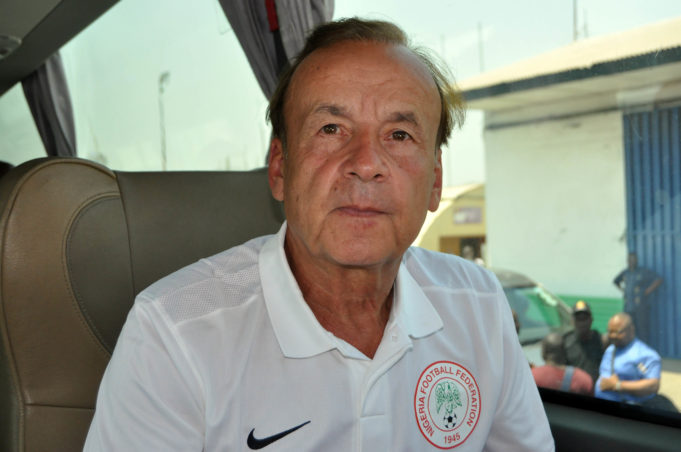 Technical Adviser of the Super Eagles, Gernot Rohr has said that the double header against Cameroon will decide if his team will be at the 2018 World Cup or not.

The Franco-German told AOIFootball.com exclusively in Abuja, that if they win the two games against the African Champions, it would be a smooth berth in Russia next year.

The soccer tactician however added that it will not be easy to beat Cameroon as they are African champions and the best team at the moment. He added that they had a very good Confederations Cup outing recently, and they have a lot of big players.

He further added the Super Eagles have recovered some of their important players, especially in three key departments, which are the defence (Balogun), midfield (Mikel Obi) and the attack (Victor Moses).

“These players are coming back and I think our team will be much better than the last game against South Africa.

“We know the game in Uyo is a must-win; if we win at home, we also have a chance to win away, because it will be very difficult in Yaounde,” Rohr said.

When asked which team is better, Rohr said: “On paper, Cameroon are better and are sure favorites. They have played 13 games in the last 10 months, compared to the four games we have played, so that makes them more united and coordinated.

“They have quality players but we believe in our ability, we know we have a chance, we are confident, we are modest and we are humble but honestly, we must win in Uyo on Friday.”

“You are never sure of anything in football, especially when playing a big team like Cameroon, but honesty, I think we can win at home.

“We know also that our team must play better than the last game against South Africa. A lot of players were not here then, but we have them now and must not give such excuses again.

“It is not sure automatically that we will beat them, we are careful but we are also very optimistic; the players are ready and I am also ready.”

Gernet Rohr has only lost only one game with the Super Eagles since taking charge from former Coach Sunday Oliseh.