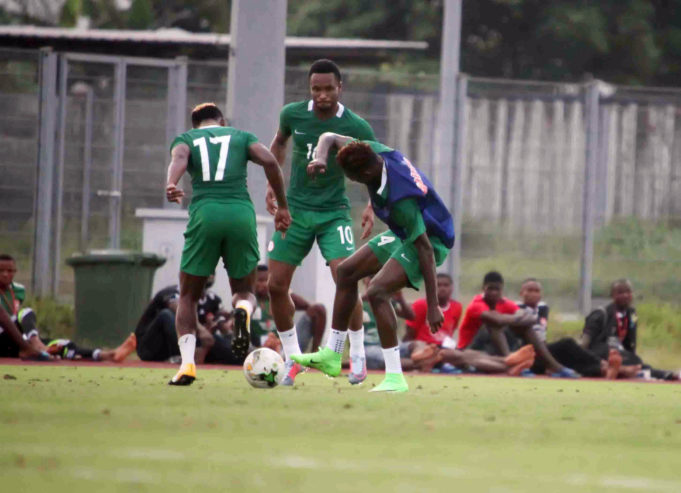 Head Coach of the Super Eagles of Nigeria, Gernot Rohr is excited over the fitness of his lads as they begin preparations for the all-important World Cup Qualifier against the Indomitable Lions of Cameroon, AOIFootball.com reports.
The team had their first training session on Tuesday evening, to the excitement of their Franco-German tactician who was impressed by their fitness level.
Rohr told journalists: “It was a good training session as everybody was involved. It was good to have the full team train and they are all fit with no injuries, so I hope it will be difficult for me to choose the starting eleven because everybody wants to play and it is a good competition for the team.”
The Eagles’ handler further posited that though Cameroon are African champions, they played in the FIFA Confederations Cup in Russia and it was not easy for them; he also added that they have not won in four games now, and yet they have a very good team.
He also added that the Super Eagles have a good team with much experience especially with the return of the Captain, Mikel Obi and defender Leon Balogun, as well as Victor Moses, who were all missing from the last game against South Africa.
“We have a strong squad, especially with the return of our experienced players like Mikel Obi, Leon Balogun and Victor Moses. They were all missing from our last game against South Africa. With their return, we can beat Cameroon,” said Rohr.