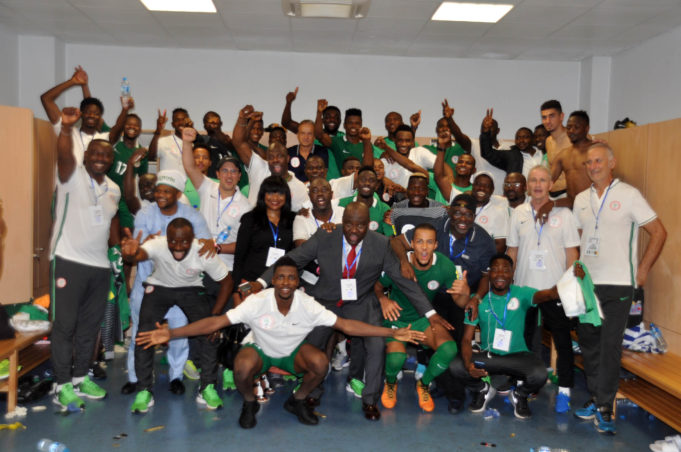 Nigeria took a huge step towards qualifying for the 2018 FIFA World Cup with a superlative performance that left African champions Cameroon totally outclassed in Uyo.

Goals from China –based duo of Odion Ighalo (his first for Nigeria from open play in a competitive game) and Skipper Mikel John Obi steadied Nigerian nerves in the first half, before Man-of-the-Match Victor Moses added a third and substitute Kelechi Iheanacho headed a fourth to assure Nigeria’s biggest –ever win over the neighbours to the east.

With only two points from their first two matches and four behind Nigeria on the log, it was understandable that the Cameroonians should start like a house on fire, teasing Nigeria’s defence mostly from the right and putting some pressure on goalkeeper Ikechukwu Ezenwa, starting his first truly big match for the Super Eagles.

Nicolas Moumi was the first to fire over the bar, before Ezenwa saved headers from Sebastien Siami and Vincent Aboubakar. The Lions were in charge for the first 20 minutes.

Then the Eagles took over. Victor Moses completely fluffed a good pass from Mikel as Wilfred Ndidi dazzled his way into the box. Ighalo was proving too hot to handle for Michael Ngadeu and Adolphe Teikeu, and both got booked in the process. In the 25thminute, Nigeria had the ball in the net from a Victor Moses’ free –kick but it was ruled off –side. Three minutes later, Moses’ header from a pull out by Moses Simon sailed narrowly over the top.

On the half –hour, the Eagles took the lead with a marvelous strike, Ighalo latching onto a brilliant Mikel pass and turning his marker inside out before unleashing a left –footed grounder that sailed past Fabrice Ondoa.

In quick succession, Ezenwa saved from Bassogog and Ondoa saved from Moses Simon, after a splendid team move from Nigeria that started with the very impressive Leon Balogun, and also involved Echiejile, Mikel Obi and Victor Moses.

Another breezy run by Moses saw his final pass blocked by Ngadeu, but from the corner kick, taken by Moses, Mikel Obi smashed home for Nigeria’s second.

By the time Moses scored with a pile –driver in the 56th minute from an exchange with Moses Simon, the game was over as a contest.

Perhaps, substitute Iheanacho failed to read the script that the Eagles were playing the African champions, and decided to head the fourth from a sublime Ogenyi Onazi pull –out with 13 minutes left.

Victory took Nigeria to nine points on the table, with second placed Cameroon seven points behind and with three matches to go. Algeria and Zambia, who have one point each, tackle each other in Lusaka on Saturday.

A thoroughly dejected Coach Hugo Broos expressed disappointment with his troops’ output on the day.

“We were thoroughly outplayed. In the first 20 minutes, we tried to play our game and impose on the match, but then Nigeria took over and never let up. They were near –perfect in their organization that my team could get only one shot at goal.

“In all honesty, I think we are out of the World Cup race. We need to win our last three matches and for Nigeria to lose all of theirs, and I don’t think that will happen.”

A delighted Coach Gernot Rohr praised his team and said they were dedicating the victory to recuperating goalkeeper Carl Ikeme. “We dedicate this win to Carl; I am sure he will be very happy about this.

“Every member of the team was in great form today, including the goalkeeper, Ezenwa. We will enjoy this victory, sleep over it and then by tomorrow morning, we can start thinking about the match in Yaounde on Monday.”

Both teams clash at the Stade Omnisports Ahmadou Ahidjo in Yaounde on Monday in a Day 4 encounter, starting from 6pm.