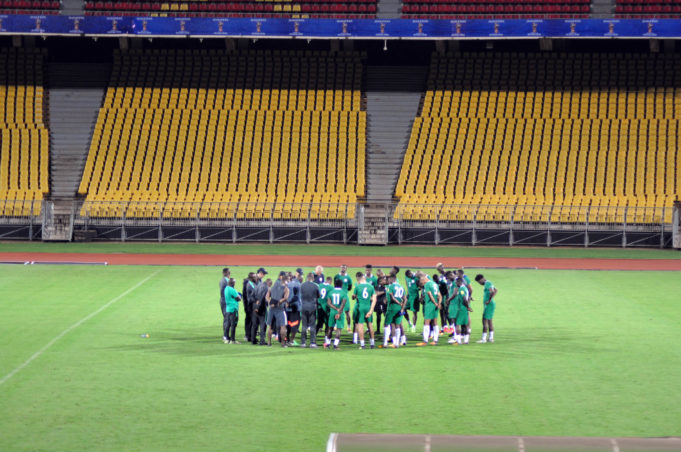 Super Eagles and Changchun Yatai striker, Odion Jude Ighalo, may miss the second leg tie of the ongoing FIFA World Cup 2018 qualifiers against Cameroon due to a leg injury he cupped up in the first leg 4-0 drubbing of Cameroon in Uyo.

The in-form striker, who opened scoring for Nigeria in the first leg 4-0 drubbing, might be missing in action in Yaoundé, where the Super Eagles are aiming to qualify with a double win over African champions Cameroon and 12 points, provided 4-point Zambia fails to win at Algeria.

Speaking to Aoifootball.com after the team’s training on Sunday night at the Stade Ahmadou Ahidjo Sport Complex, Super Eagles’ Coach, Gernot Rohr said: “The last game in Uyo is gone and we must now focus on Monday’s game. They got a slap on Friday, so we expect an explosive beginning to the game from Cameroon. We will try, of course, to contain them; they are aggressive and very physical but we are also ready physically to have a big fight with them.”

The Eagles’ gaffer gave insights to his starting lineup saying, “I would like to bring the same lineup that started in Uyo but there is a little question about Ighalo’s leg, so we don’t want to take any risk and I might also decide to bring some fresh players into the starting eleven.”

He further hinted of a possible replacement for Ighalo if he’s unable to start Monday’s game, saying:

“If Ighalo cannot play, we will decide, but we will wait till the last minute for him to improve; we have two other possibilities-we have Kelechi who came in and scored in Uyo and also we have Anthony who is coming to the team for the first time. So, I can say we have two good centre forwards who are ready to play on Monday.”

The Eagles are aiming to become the first team to complete a double over Cameroon in a World Cup qualification round with victory on Monday night.

The match comes up at the Stade Ahmadou Ahidjo Sports Complex in Yaoundé by 6pm Nigerian time.