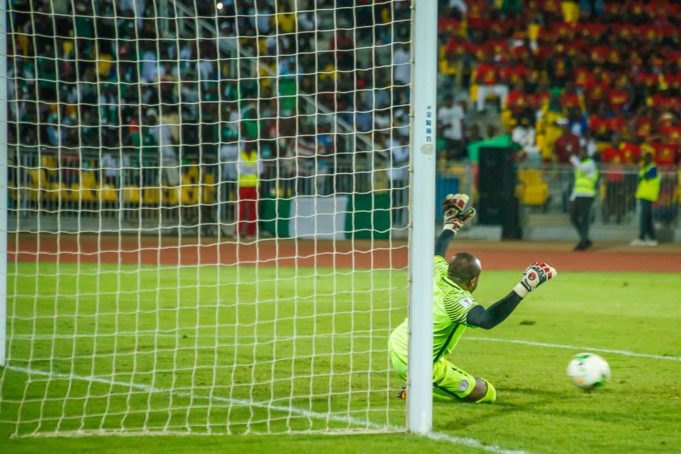 Head Coach of the Super Eagles, Gernot Rohr, has heaped praises on FC Ifeanyi Ubah shot-stopper and Captain of the home-based Super Eagles Ikechukwu Ezenwa, for the scintillating performances during the double header World Cup qualifier against the Indomitable Lions of Cameroon in Uyo and Yaoundé, respectively.

In an exclusive interview with AOIFootball.com after the Eagles’ 1-1 draw at the Stade Ahmadou Ahidjo Sport Complex in Yaoundé, Rohr said:

“I am very happy with the performance of Ezenwa he because did very well again today (Monday). Yes, there was a penalty, but you cannot blame him, he also made some very big saves some minutes after the penalty which was very crucial for us; he did very well in the two games and I must commend him.”

The Franco – German further stressed that “you know that he’s our 4th goalkeeper, the three other ones you know-Enyeama is injured and cannot play, Carl Ikeme is sick and we are praying for him, Akpeyi is also injured, so it was a problem for us going into this fixture,” Rohr added.

Rohr also posited that Ezenwa conceded just one goal which was from the penalty spot.

“You can say he did very well; he must work harder now. We have two goalkeeper trainers to help him improve more, but overall, he did brilliantly well and also he played well for the CHAN team against Benin, so I am excited that he will deliver for the team when called upon.”

Ezenwa has been with the Super Eagles since 2015 when he was invited by then coach Sunday Oliseh and was also part of the Olympics team at the 2008 Beijing Olympics where he won a silver medal.