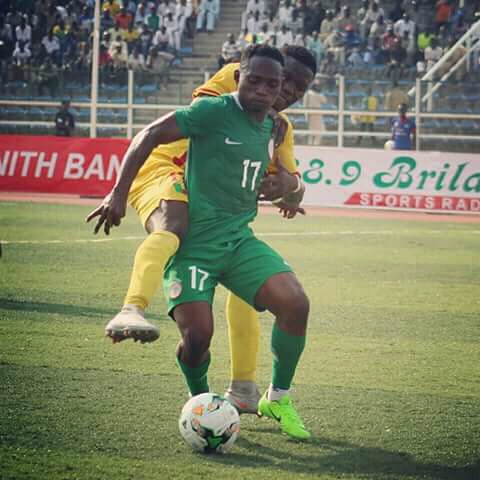 Super Eagles’ and El-Kanemi Warriors of Maiduguri attacking midfielder, Samuel Mathias, is confident the home-based team will clinch the WAFU Cup for a record 8th time when the competition begins in Ghana next week.

The midfielder, who spoke exclusively to AOIFootball.com in Abuja, where the team is intensifying preparations ahead of the sub-regional tournament said:

“First, I must give God the glory for his grace and mercy upon my life and for making me part of the 18 invited players for this tournament; it’s an honour to always represent the country and I will give my one hundred percent to make the country proud in Ghana come next week.”

The free scoring midfielder, whose goals have been key to El-Kanemi’s impressive home record in the league this season, also posited that he and the rest of the players are not just going to Ghana to make up the numbers, but also try to win the trophy.

“We are going to compete for the title; we have a mindset to qualify first and get to the group stage proper and then try to win the cup. We know it will not be easy but by the grace of God, we have the team that can achieve it,” he added.

The Eagles’ midfielder also stressed the fact that the unity and commitment in the team is very good and they will definitely thrive on it.

Mathias has scored 12 goals for El-Kanemi Warriors this season and was part of the home-based Super Eagles that qualified for CHAN 2018 after beating Benin Republic 2-0 in Kano last month.

Similarly, the mercurial midfielder said the team would rise to the occasion and cope withoutteammates Alhassan Ibrahim and Stephen Odey who have moved to Europe for greener pastures.

He said: “I am happy for both players but we must do well to keep the team going. 99% of footballers in Nigeria dream to play in Europe, so I can’t blame both players for going abroad to further their respective careers.”

Stephen Odey is the leading goal scorer NPFL this season with 18 goals for his former club MFM before his switch to Switzerland to join Swiss Club FC Zürich. He is set to win the Golden Boot unless Anthony Okpotu of Lobi Stars scores this weekend to topple him.

Alhassan on the other hand, moved to the Austrian Bundesliga to join Austria Vienna.