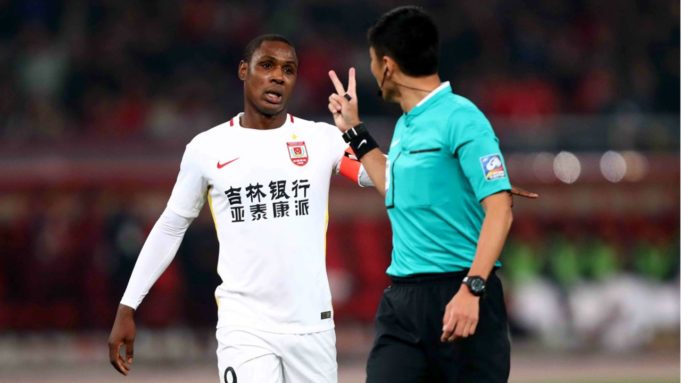 Changchun Yatai and Super Eagles striker, Odion Jude Ighalo, was back among the goal scores in the Chinese Super League on Friday.
The striker put in a man of the match performance as his club trashed and compounded the relegation woes of national teammate and Tianjin Teda’s Captain, John Obi Mikel 5 – 1.
The former Watford striker, who fired blanks in Changchun 3-1 thrashing at the hands of league leaders Guangzhou Evergrande last week, did better away to Mikel’s club.
Both players were on for the entire duration of the match, but it was Ighalo who had a better impact.
Ighalo setup Marinho in the 38th minute to put Changchun two goals up and scored his 12th goal of the campaign with a well taken strike in the 69th minute to make it 5-1.
The win leaves Changchun Yatai 10th with 31 points, while defeat means Tainjin Teda remain 15th with 16 points from 24 games.