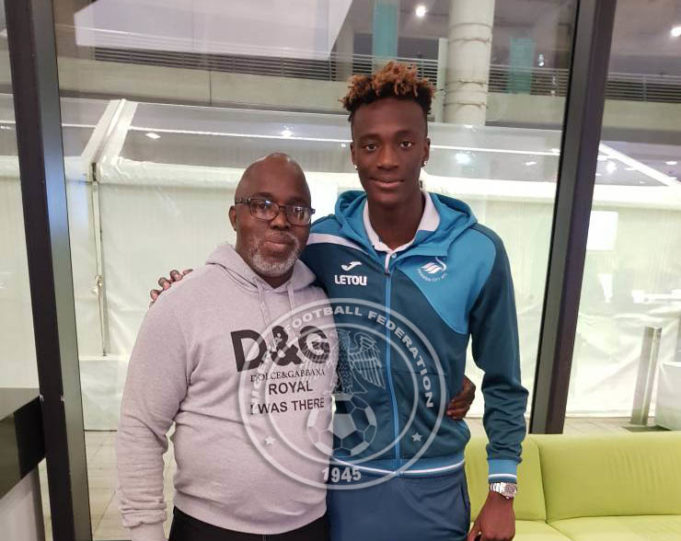 The Nigeria Football Federation is much closer to securing the services of Chelsea FC of England forward Tammy Abraham, according to NFF President Amaju Pinnick, AOIFootball.com can report.

Abraham who scored 23 goals in 41 appearances last season on loan at Bristol City, is one of the most sought after young players in the whole of Europe. He has also featured for England in different youth categories.

According to thenff.com, NFF President Amaju Pinnick met with the tall striker, who has represented England at junior level but is eligible to wear the green-white-green for the Super Eagles having never played for the Three Lions.

“Most recently, there was a meeting with Tammy, which Tammy’s agent, Neil Fewills also attended. It was a useful meeting, and I can say the talks are at an appreciable level now and all is looking good.

“Tammy is like a son to me, because his father was my childhood friend. I believe he is a good prospect for the Super Eagles and the effort is well worth it.”

Born 2nd October 1997, Tammy is 1.90m tall, and is said to have immense respect for fellow Chelsea FC man Victor Moses, who also played for England at junior level before committing his senior international career to Nigeria.

Another source at the said meeting confirmed to thenff.com that Moses actually called in during the meeting to lend a voice to the call for Tammy to opt to fly with the Eagles rather than hunt with the Lions.

Moses himself has proved a worthwhile ‘catch’ for Nigeria, emerging the Super Eagles’ most valuable player in his first tournament – the 2013 Africa Cup of Nations that Nigeria won in South Africa – and playing at the 2014 FIFA World Cup finals in Brazil where the Eagles made the Round of 16.

He has also been an impact player for the Eagles in the ongoing 2018 FIFA World Cup qualifying race, scoring two in the 3-1 triumph over Algeria in Uyo last year and emerging Man-Of-The-Match in both encounters against African champions Cameroon earlier this month. The four points from those two games have taken the Super Eagles within a kissing distance of Russia 2018.