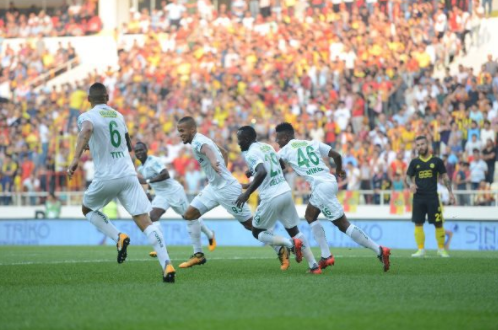 Super Eagle’s defence trojan, William Troost Ekong, got his second goal of the season for Turkish Club Bursaspor away to Keyserispor, however the goal was not enough as they suffered their second consecutive loss with a 3-1 thumping.
With Bursaspor 1-0 down after Gural Vural had put the home side ahead, Ekong equalised 5 minutes from half time when he diverted a pass from fellow Nigerian Mikel Agu into the bottom corner to put his side back into the match.
Ekong’s goal was however just a consolation as two second half goals from Jean Armel Kana-Biyik and Ryan Mendes ensured Bursaspor remained 8th on the log after also going down to table toppers Galatasary last weekend.
Troost Ekong was however rated the best Bursaspor player on the night with a game rating of 7.5 while also making a game high of 5 clearances and 4 interceptions.
He also won all 2 of his arial duels contested and completing all his take on successfully.
After the game the defender said he was happy to be on the score sheet but would have loved his team to win.
“Not the result we wanted, happy to score my second goal but would have exchanged it for a win. Up next Nigeria,” Ekong said.
Ekong is expected in Nigeria on Sunday night as the Eagles begin preparation for the must-win World Cup qualifying clash against Zambia in Uyo next Saturday.

I’ll give my best for Eagles, Mikel Agu