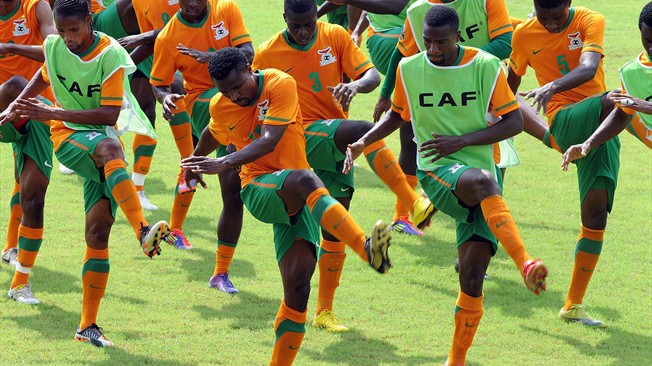 The Zambia Football Federation has suffered another setback ahead of their crucial World Cup qualifier against the Super Eagles of Nigeria in Uyo on Saturday, after it was hit with US$7,000 by FIFA on Wednesday morning for failing to control their fans in a World Cup qualifying clash against Algeria in Lusaka last month, AOIFootball.com reports.
The federation had suffered huge blows leading up to the match when star striker Brian Mwila who downed the Algerians last month was ruled out, as well as K.V. Oostende of Belgium midfielder, Emmanuel Banda and Sweden-based Edward Chilufya who all pulled out due to injury.

Zambia is among the eight African countries that have been handed punishments by FIFA for various offences committed during September’s 2018 World Cup qualifiers.
Zambia must now pay US$7,000 after their fans threw objects when they played Algeria in Lusaka.
A statement from FAZ Communications Manager Desmond Katongo reads:
“Following the unruly behaviour of soccer fans during the 2018 FIFA World Cup qualifier game between Zambia and Algeria, the Football Association of Zambia has been fined 7,000 Swiss Francs by FIFA.

“While we appreciate the support that the fans continue to render to the team, it is our hope that this support is kept within the confines of the law and within the rules of the game that ride on Fair Play.

“FAZ wishes to appeal to fans across the country to desist from behaviour that puts the name of the game into disrepute or cause damage to property and loss of life.

“Yes I can confirm that we have been fined by FIFA. We have been fined because some of our fans started throwing water bottles onto the pitch when Zambia scored the third goal. We have often advised our supporters to show exemplary behaviour whenever the federation is hosting international games. Instead of us investing the little resources we have in developmental initiatives, we are now paying fines as result of what transpired.

“FAZ wishes to appeal to soccer fans to embrace the spirit of fair play during and after games. Fans need to change their conduct during these international games because we risk being banned. We will also not wait to take possible action such as moving our international games to other venues. They need to change their behavior for the good of the game and the reputation of the Federation and the country.”