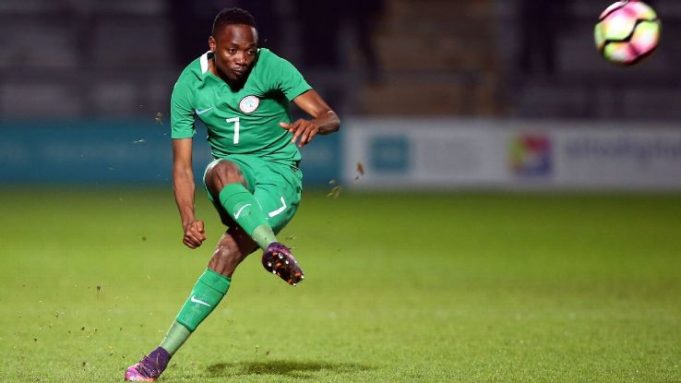 Super Eagles’ Head Coach, Gernot Rohr has defended his decision to include Leicester City forward Ahmed Musa in his team for the must- win World Cup qualifier against the Chipolopolo of Zambia in Uyo on Saturday.

Rohr, who spoke with AOIFootball.com after the Super Eagles’ first training session in Uyo on Tuesday, said Musa’s experience is vital to the team and the reason for his lack of playing time at Leicester City is only known to Craig Shakespeare.

“For your information, Ahmed Musa is playing Football for his club side; he plays for the B team in Leicester regularly and he is playing very well.
“Although he’s disappointed not to be playing in the first team at the moment, he played in the League Cup this season and scored in that match so I am really surprised by his lack of game time for the first team,” Rohr said, adding that, “His influence in the group is very positive. I love the attitude he brings to the team. He is always positive and he is a player who can have a very good influence on his partners, that is why he is with us and we are very happy to have him for the match against Zambia.”

Rohr also praised the player’s World Cup experience and expects him to use it in firing the team to Russia, come Saturday in Uyo.
“Musa is a player who has quality World Cup experience and hopefully, he will put it to play against the Zambians. I watched him at the last Word Cup where he was fantastic, so I am always sure of his abilities,” concluded Rohr.

Ahmed Musa scored twice at the 2014 World Cup in Brazil and will be hoping he returns to the city he loves so much, Moscow, when the World Cup kicks off next year in Russia, but first the Eagles must first fly past the Chipolopolo of Zambia on Saturday.
The former CSKA Moscow star as featured is on of the long serving players currently in the super eagles camp, having featured 63 times till date since 2010 when he made his debut scoring 13 goals for Nigeria.