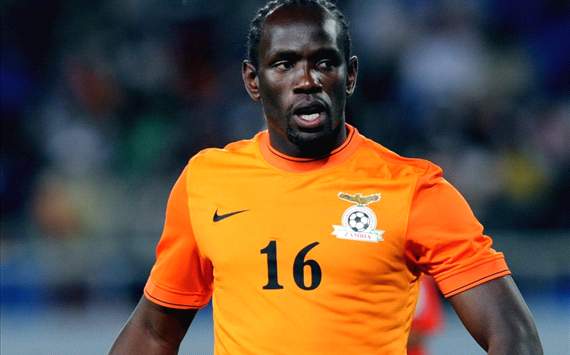 The Chipolopolo of Zambia Captain, Kennedy Mweene, has advised the Super Eagles of Nigeria to play quality and top teams ahead of the FIFA World Cup in Russia next year.

Nigeria at the weekend in Uyo, took all three points to seal their qualification to Russia at the expense of the Zambians who gave the Super Eagles a run for their money.

And Mweene, who was in goal for the Copper Bullets, told Aoifootball.com at the Akwa Ibom International Airport just before their departure, that the Super Eagles has what it takes to make the continent proud in Russia, but they must play high level oppositions to enable them blend together as a team.

“The Super Eagles are a fantastic team I must confess; they possess some of the best players on the continent and they have what it takes to succeed on the big stage. My advice to the Nigeria Football Federation is that they should engage them in quality friendlies with countries like Brazil, Italy and maybe Spain, so that the players can build an understanding before the World Cup proper,” Mweene said.

The South Africa-based shot-stopper also praised the ability of his team for matching the Super Eagles man to man despite having a very young and inexperienced squad.

“We played very well I must say even though we have a very young and inexperienced team compared to the Super Eagles. The game was a very tough one for both countries and I am happy we proved ourselves on the big stage.

“Nigeria capitalised on our mistakes and scored in the second half and that was a very decisive moment in the game. The game was almost over but you know in football, one team has to make a mistake for the other to score and that was what happened.

“When the draws were made, many favoured Algeria and Cameroon to be the front runners in the group, but that did not materialise as it was Nigeria and Zambia who took the initiative to lead the group. I wish Nigeria well and hope Zambia can qualify for the World Cup in 2022,” Mweene concluded.