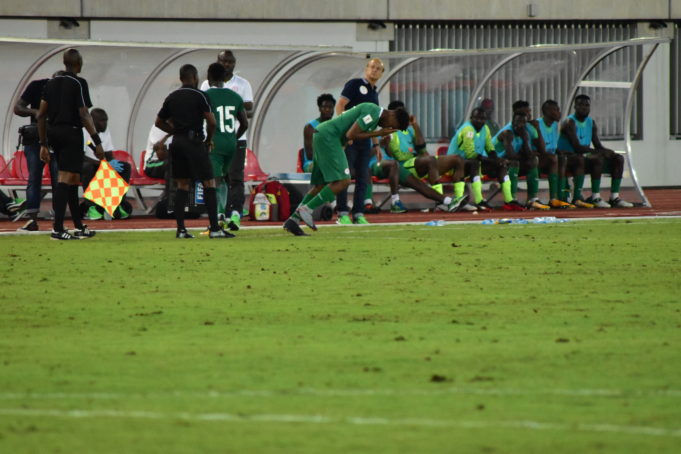 Technical Adviser of the Super Eagles Gernot Rohr, has opened up on why he decided to start Moses Simon ahead of Arsenal FC of England star, Alex Iwobi in the game against Zambia at the Godswill Akpabio International Stadium in Uyo last Saturday.

Rohr, who spoke to AOIfootball.com exclusively in Abuja on Wednesday, said he was impressed with the attitude and overall play of Simon in the double header against Cameroon.

“Moses Simon was very impressive for us against Cameroon in Uyo and Yaoundé. I knew the return of Alex Iwobi will mean a very tough decision for me to decide who starts but I was able to pick the perfect player for each moment.

“Iwobi is a very important and integral part of our team, same as all other players that have played in the qualifier’s, but I must choose the best eleven to represent the country in every match and that was what we did against Zambia in Uyo and we are happy it paid off,” Rohr said.

The Franco-German also revealed that he told Iwobi to go in and change the game when he entered the fray, and he was happy the decision to let Iwobi study the game from the bench was eventually a success.

“When I called Iwobi to get into the game, I told him the same thing I told him before the game, that he would be the game changer. It was obvious we needed more attacking powers to put the Zambians under pressure and Iwobi was in the perfect condition to deliver. He went in and changed the game for us,” Rohr added.

Rohr also posited that he is open to give all players of the Super Eagles a perfect atmosphere to thrive, stating that he must always look for the perfect situation for all his players.

Emmanuel Emenike in search of new club in London

FIFA rankings, not true reflection of our current status – Onazi