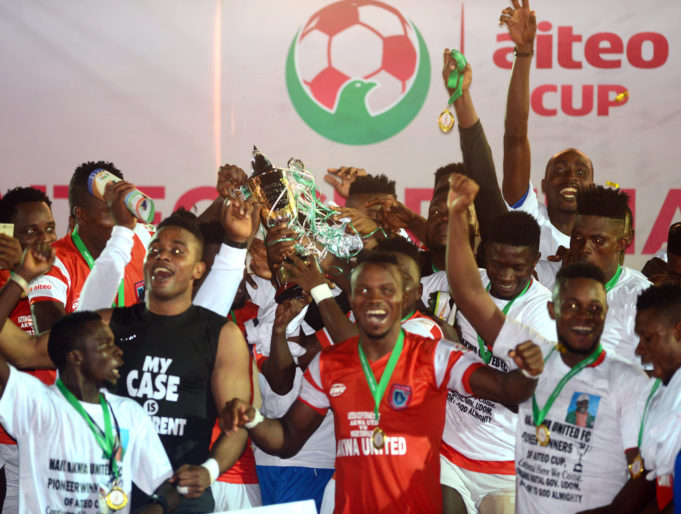 Akwa United on Sunday made history by winning the Aiteo Cup title in their second year of formation, following a 3-2 win in penalty kicks over Niger Tornadoes at the Soccer Temple, Agege Stadium, in Lagos, AOIFootball.com reports.
Niger Tornadoes’ Bolaji Adeyemo missed his penalty kick while Gabriel Okechukwu scored his for the “Promise Keepers”, sealing victory over the Ikon Allah Boys.
Agege Stadium, venue for the encounter, was electrifying as supporters of both teams came in their numbers to cheer up their darling clubs – who were playing in the cup final.
Tornadoes had the game’s first chance through Abdullahi Wakili who fired over the bar from inside Akwa United’s box.
In the 12th minute, Tornadoes won a free-kick in a promising area but Reuben Ogbonnaya struck his effort wide.
An attempt at goal came in the 38th minute when Niger Tornadoes’ Babawo Ibrahim’s effort was saved by Olorunleke Ojo.
Also,  Akwa United’s Ifeanyi Ifeanyi wasted a glorious chance at two minutes before the break when he was teed up by Reuben Ogbonaaya, but his effort failed to break the deadlock in the closing stages of the first half.
On resumption, both sides maintained a cautious approach and the closest attempt was when Rabiu Sani’s effort was saved by Olorunleke Ojo.
With five minutes left, Akwa’s Okechukwu was presented with his side’s best chance but lifted his effort over the bar with the keeper to beat after beating the offside trap.
With this, “The Promise Keepers” have booked a continental ticket to represent Nigeria next season in the CAF Confederations Cup.
The match had dignitaries, including CAF President, Ahmad Ahmad, Governor Udom Emmanuel of Akwa Ibom, his Lagos State counterpart, Akinwunmi Ambode, NFF President Amaju Pinnick, and so many others.