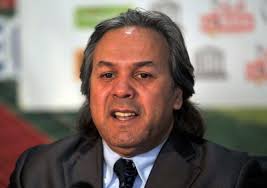 Madjer, one of the greatest Algerian players of all time, is best remembered for his nonchalant back-heeled finish for Porto in their 1987 European Cup final win over Bayern Munich.

He first took charge of his country in 1994, with his most recent spell ending in 2002 after an early exit from that year’s Africa Cup of Nations.

Madjer’s aim on his return to the helm will be to take the team to the 2019 Cup of Nations in Cameroon, with their next qualifier due to be against The Gambia in March.

Before that, they must complete their failed World Cup campaign with a fixture against Nigeria next month.

His first assignment will be Algeria’s final African qualifying Group B FIFA 2018 World Cup qualifier against the Super Eagles of Nigeria on November 10.

Madjer captained the Algerian team that won the 1990 Africa Cup of Nations as hosts, beating Nigeria 1-0 in the final.

He won the 1987 UEFA Champions League with FC Porto where they stunned Bayern Munich 2-1 in the final.

He was in the Algerian squad that debuted at the FIFA World Cup in Spain 1982.

Al-Nassr to unveil Ahmed Musa in grand style on Friday