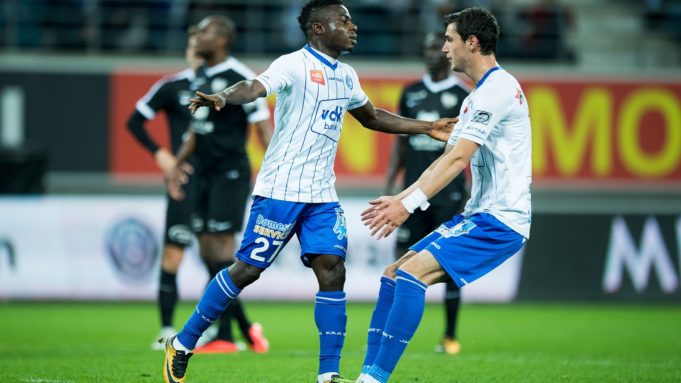 Fresh from scoring his first goal of the season less than four days ago, Super Eagles’ dazzling winger, Moses Daddy Simon continued a week of amazing performance of Nigeria attackers across the globe when he scored a quick-fire double to earn KAA Gent their third straight league victory.

Simon, who fired in the first of his two goals from the penalty spot in the 36th minute to put Gent 2-0 up on the night after Yuya Kubo, had earlier given them the lead in the 3rd minute.

The former GBS Academy product stepped up two minutes later to complete his brace and Gent’s third when he sent the goalkeeper the wrong way from the penalty spot to wrap up a 3-0 victory for his side.

It was the third goal for Simon in two games, having failed to score in his previous eighth league outings for Gent and the goals will surely come as a morale booster for the attacker ahead of the Eagles’ clash against Algeria and Argentina in November.

Simon was on for all 90 minutes and picked up the Man of the Match award. Fellow Nigerians Samuel Kalu and Anderson Edit both featured for the entire duration of the game.

The result leaves KAA Gent in 12th place with 13 points from 12 games.