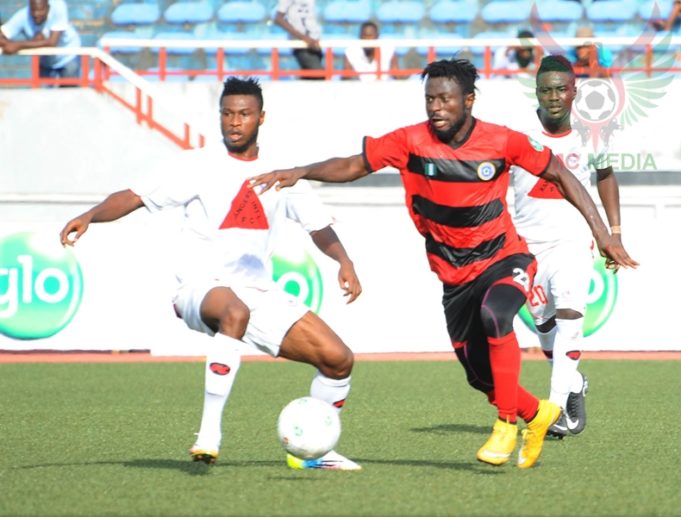 Home-based Super Eagles and Lobi Stars of Makurdi striker, Anthony Okpotu has said he’s still undecided about his next move, whilst also urging clubs that want him to go through the right channels if they want him ahead of next season.

The striker, who spoke to AOIFootball.com exclusively in Abuja, said he was happy to also receive the Rashidi Yekini Award for Top Goals Scorer in the Nigerian Professional Football League last season.

“it’s a thing of joy to receive the award for the highest goals scorer. I am very happy my hard work and determination finally paid off and I want to specially thank the Rashidi Yekini Foundation for honouring me with this accolade.

“it’s good for me as an individual that several clubs want my services; I am not surprised though, whether I will be with Lobi or not, it’s still undecided for now, but I urge clubs who really want my services to do it the right way so that both parties will be happy at the end of the day,” Okpotu said.

The striker also revealed that he has also gotten several options from foreign clubs but nothing has been decided yet.

“Yes, it’s true that I have gotten several offers from Europe and even some African countries, but I won’t like to reveal their names yet until a proper bid has been submitted to my club,” he revealed.

When asked if he will be around for the CHAN tournament in Morocco next year, Okpotu said everything is still very possible.

“I have worked so hard to be a member of the home-based team and the CHAN tournament is a competition I have been looking forward to because it’s an avenue for me to represent my country on the big stage.

“For now, I can’t say what the future holds for me, but if you ask me, I would definitely want to be in Morocco next January,” the striker concluded.

The 23 year old striker also made history by becoming the first player in the NPFL to score three hat tricks in one season.

Okpotu is now third in the list of most NPFL goals in a single season behind Eyimba of Aba Mfon Udoh (23) and former Kaduna United striker Jude Aneke who scored 20 goals.