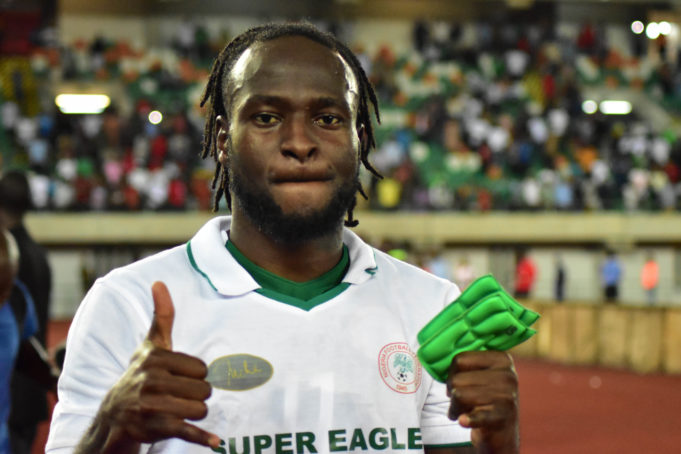 Former Nigeria international, Ifeanyi Udeze is of the opinion that Super Eagles’ and Chelsea FC forward, Victor Moses is the strong favourite to win the 2017 CAF Best Player Award, AOIFootball.com can report.

Udeze, who spoke on Brila FM, which was monitored by AOIFootball.com, said Moses’ chances of winning the award his even higher than when John Obi Mikel missed out in 2013 despite winning the AFCON.

“I believe Victor Moses has an 85% chance of the winning the best player award, because if you look at his performance last season, he was very instrumental in guiding Chelsea to the Premier League title and also helped Nigeria qualify for the World Cup with a game to spare,” Udeze said.

The former Super Eagles’ defender however added that the likes of Salah, Mane and Aubemayang are also strong contenders to the Nigerian winger’s chances of winning the coveted award.

“Look at Aubemayang for example, he won the highest goals-scorer in the Bundesliga last season, but his contribution to Dortmund and the national team was below average; Gabon even failed to impress at the Nations Cup and might also fail to qualify for the World Cup.

“My biggest worry for Moses is Mane and Salah, because they both did well at the Nations Cup earlier in the year, even though they both lost out to eventual winners Cameroon; they were both impressive for club and country and should both be at the World Cup next year,” Udeze added.

The former West Bromwich Albion defender also faulted CAF for including just two Nigerians on the list, stating that there were a whole lot of Nigerians who performed better in the past one year.

“Personally, I feel more Nigerians should have been on that list, but I guess they have their reasons for including just Moses and Ekong.”

The 2017 CAF Best Player Award will hold in January next year in Accra, with the winner succeeding reigning champion, Riyard Mahrez of Algeria and Leicester City.