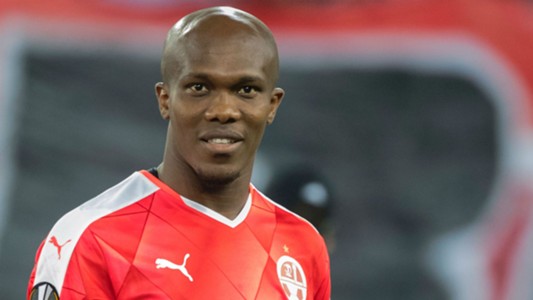 Super Eagles’ striker, Anthony Nwakaeme continued his resurgent league form when he scored his fourth league goal for Hapoel Be’er Sheva in their 2-0 win away at Maccabi Petach Tiikva, AOIFootball.com can report.

After an uneventful first half which saw former Barcelona attacker, Isaac Cuenca introduced for the away side after an injury to Maor Melikson in the 37th minute as both teams went into the break deadlock.

The second half was much better as Be’er Sheva got the breakthrough goal via the booths of former Chelsea of England midfielder, Ben Sahar who rifled home in the 60th minute to give Nwakaeme’s side a 1-0 lead.

With pressure mounting on the away side, Anthony Nwakaeme scored the security goal with just 13 minutes of normal time left to make it 2-0 and seal all three points for Be’er Sheva.

Having failed to score in his four league outings, the 28-year-old attacker has now scored four times in his last three league outings for Be’er Sheva.

Nwakaeme is expected to lead the Super Eagles’ attack in the absence of regular starter Odion Ighalo against the Fennec Foxes of Algeria in Constantine on Friday night.

The result now leaves Be’er Sheva third in the Israeli Premier League with 20 points from 9 games, 3 points behind leaders Hapoel Haifa who have 23 points from 10 games.

Injury Rumours: I’m fine and will be available for selection against Sierra Leone, says...