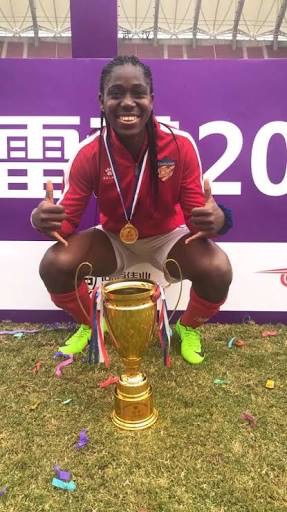 Super Falcons and Dalian Quanjian FC striker, Asisat Lamina Oshoala, was in fantastic as she led her club to a 5-3 victory over Shanghai Ladies in the Final of the Chinese Women’s Cup played on Tuesday, AOIFootball.com can report.

The striker, who was completely dominant and too hot for the Shanghai Ladies to handle, scored two goals and provided two assists to help her team to a league and cup double after Dalian had earlier clinched the league title last month.

The raining African Football Queen, who could not hide her joy, took to social media to express her happiness and wrote “SUPER CUP CHAMPIONEEEEE. BUZZINGGGGGG…. mad game…5-3 against Shanghai, two (2) goals and two (2) assists from me”.

Oshoala emerged the highest goals scorer in the league with 12 goals.