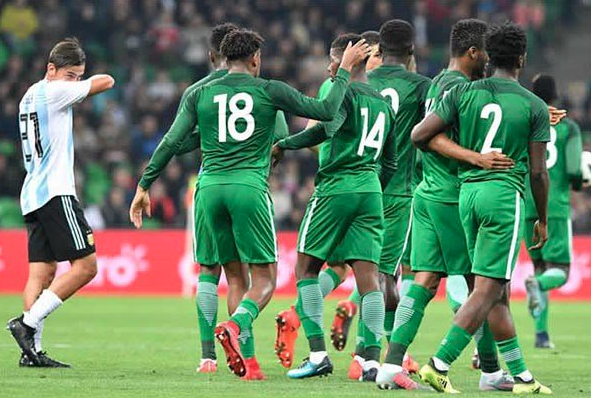 Players of the Super Eagles of Nigeria have taken to the social media to express their delight after the team’s thrilling comeback win over world football powerhouse, Argentina in an international friendly on Tuesday, AOIFootball.com reports.

Nigeria came back from 2-0 down to seal a 4-2 win over Argentina at the Stadion FK in Krasnodar, Russia.

After the win, the excited Super Eagles’ players dropped their reactions on social media platforms.

“So proud of the boys #SuperEagles @NGSuperEagles,” defender William Troost-Ekong wrote on Twitter.

“Nigeria 4, Argentina 2. naso-naso,” the defender is heard saying in a video he shared on his Twitter.

Gernot Rohr for the first time tried out the three-man defence system and Super Eagles’ captain John Mikel Obi admitted that they initially struggled with it.

“We played a new system today. We never played it before so we struggled to find our feet in the first half but at the break, the coach spoke to us and we corrected our mistakes which helped us to fight back. Our team is still a work in progress,” Mikel is quoted saying by the Super Eagles Twitter account.

“First time in a formation of such, tough first half but we came out strong and everyone sacrificed for each other to come out with such a great result… I’m really proud of the efforts. God is good.God bless Nigeria,” midfielder John Ogu said on his Twitter.

“Amazing comeback win and great teamwork. We prepared well for the game and started with a new formation. We deserved to win!” Shehu Abdullahi said.

“Thank you Krasnodar, we had amazing memories to savour. Thank you Nigerians for the massive support always. We won this together! Victory for us!”

“Algeria on Friday was solid already. But today is kind of historical coming back like this from a 0-2 vs Argentina. Considering the fact that we played like that system for the 1st time makes it even greater!! Up up Super Eagles, up, up Nigeria,” Leon Balogun wrote.

Rohr is happy with the way his men responded from 2-0 down to win the game.

“I am happy we came back from 2 goals down to win 4-2. It shows we have great team spirit and determination when you keep fighting after going two goals down against a great team like Argentina,” Rohr is quoted to say by the Super Eagles Twitter account.

“It’s good victory for us but it doesn’t mean we’ve become favourites to win the World Cup. We stay humble and realize we have more work to do.

“We prepared well for this game because playing Argentina is big for us, maybe it is different for them.”

The players are expected to depart for their various clubs on Wednesday after arriving in Constantine.