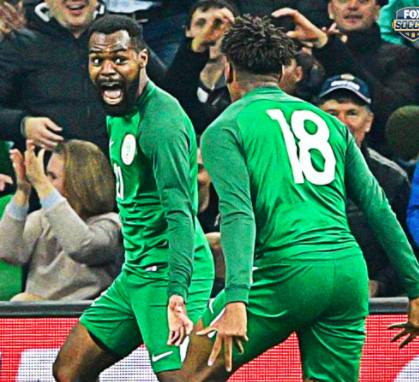 Super Eagles’ debutant, Brian Oladapo Idowu, has said he’s in cloud nine after scoring less than ten minutes after coming on for Nigeria against Argentina on Tuesday night, AOIFootball.com reports.

The 25-year-old Russian-born Nigerian, who just switched allegiance to play for the Super Eagles, told AOIFootball.com exclusively that it was a dream come true for him to finally play for Nigeria.

“To be honest, I am short of words to describe how I feel right now. Should I just say this is the best night of my life, yet may be if I make it to the World Cup then it will surpass this achievement for me,” Idowu said.

Idowu, who was born and raised in St. Petersburg to a Nigerian father and a Russian mother, also praised the technical crew and players of the Super Eagles for welcoming him with open arms to the team.

“I must show my appreciation to the coaches and my teammates and to all Nigerians who made this debut possible for me, because without you, all this might not have been possible.

“I am a proud man today because I chose to play for one of the best national teams in the world and we demonstrated it by beating Argentina. I am very confident we can replicate this kind of form at the World Cup next year.

“It’s always a joy to score a goal as a defender but when you score on your international debut, then I will say it is an amazing feeling for me. I am super excited and I hope this will not be my final game for the Super Eagles of Nigeria.

“I know I may sound over-ambitious, but I definitely want to represent my fatherland at the World Cup come next year in my country of birth. I know the competition in the national team is intense but I believe I have what it takes to be a part of this great squad,” Idowu concluded.

Idowu made a sensational debut for the Super Eagles after replacing Ola Aina at half time, and put the Nigeria 3-2 up, nine minutes later before Alex Iwobi made it 4-2 on the night to complete a massive turnaround for Nigeria in Krasnodar.