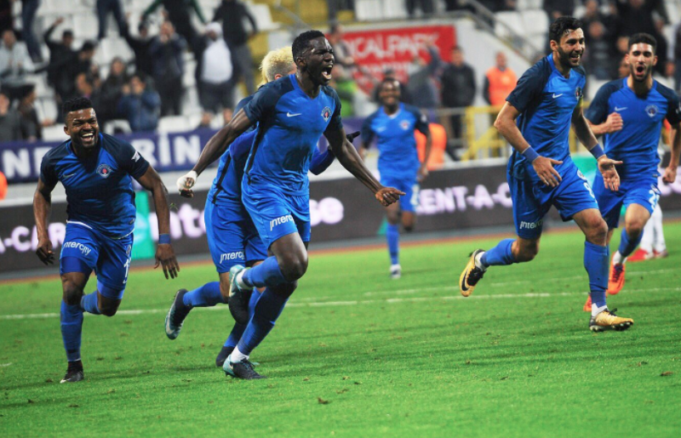 It was a scoring weekend for Nigerian players abroad, and a couple of them surprised themselves by getting in on the scoring sheet. Kenneth Omeruo, known only for ensuring his team keep a clean sheet in a match was the saviour for his club Kasimpasa that was after in-form Eduok got the opening goal. Omeruo’s 90th minute strike ensured all three points. Bartholomew Ogbeche was a hat trick hero for his dutch side Willem II. All the details and more here.

Alex Iwobi: The Eagles forward contributed his own 25 minutes to Arsenal’s slim last cute victory against hard fighting Burnley at Turfmoor. Alexis Sanchez scored the gunners only goal in the 90th minute. Iwobi came on for Jack Wilshere in the 67th minute.

Wilfred Ndidi: The former Genk man shone for former EPL Champions Leicester City playing all 90 minutes. The Foxes however settled for a 1-1 draw away to WestHam United.

Kelechi Iheanacho: Sat out on the bench for all 90 minutes for Leicester as Coach Claude Puel didn’t bother the former Manchester City man.

Victor Moses: VM returned but was an unused substitute in Chelsea’s 1-1 away draw at Liverpool.

Moses Simon: Super Eagles winger Moses Simon started the party for Gent in their 3-1 home win against  Taiwo Awoniyi’s Royal Excel Mouscron. The former AS Trencin of Slovakia wide man was fouled in the box and he picked himself up to score from the penalty spot. His team went on to score two more goals that was after the equaliser from Awoniyi. Anderson Esiti and Samuel Kalu were also part of the party. Though the latter was subbed off in the 75th minute.

Taiwo Awoniyi: The on-loan Liverpool forward scored an equaliser for his club Royal Excel Mouscron to put them back in the game against Gent but the team eventually lost 3-1 to the host.

Uche Agbo: was a surprise goal scorer for Standard Liege in their 0-2 away win at Genk. The former Granada of Spain utility player scored his team’s second in the 81st minute.

Henry Onyekuru: the petit striker failed to get to on the scorer’s sheet but was part of Anderlecht’s 4-0 win against Kortrijk. Abdul Ajagun came on for Kortrijk in the 87th minute.

Ogenyi Onazi: was on for 45 minutes for Trabzonspor in their 2-1 away win at Sivasspor. Elderson Echiejile was an unused substitute for Sivasspor in the game.

William Ekong: was on for the entire match duration for his side Bursaspor in their game against Karabukspor. Bursaspor won 2-1.

Simy Nwankwo: Was an unused substitute in Crotone’s 3-0 loss to the Old Lady, Juventus.

Orji Okonkwo: was among the scorers on the night as Bologna defeated Sampdoria 3-0 in a convincing game in the Serie A. Okonkwo scored in the 73rd minute just 3 minutes after he was introduced.

Joel Obi: was on the entire game for Torino in their 0-0 draw against AC Milan. 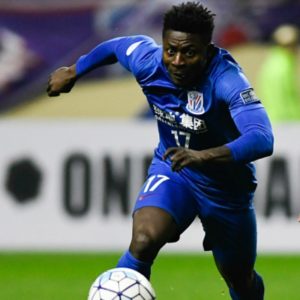 Obafemi Martins: Though the season has ended in China, it was time for the Chinese Cup and Obafemi Martins continued from where he stopped last week in the first leg as he again was part of the scorers on the night as he helped secure the cup for his club Shanghai Shenhua. Having handed his side a 1-0 advantage from the first leg of the final last week, the 33-year-old followed up with a stunning effort as the hosts’ comeback attempt proved futile despite eventually claiming a 3-2 victory.

Chidiebere Nwakali:  scored a fabulous freekick for Sogndal in their 5-2 win over Vaalerenga in the Norwagian league.