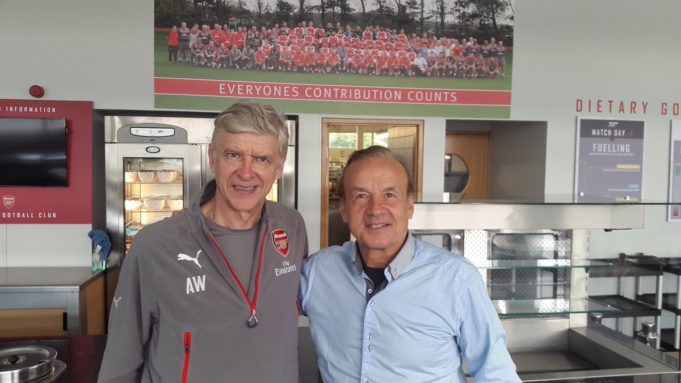 Pinnick, who is a diehard fan of the North London club, told journalists at a function in Lagos, that the NFF approached the French gaffer after Paul Le Guen turned down the job, a decision the NFF boss is now grateful for.

“First thing we did was getting a coach; of course, we all remember the name of the first coach Paul Le Guen. To us, it was a blessing in disguise because when we decided again that we wanted a coach, and everybody knows that I am an Arsenal supporter, we tried to reach out to Arsene Wenger for consultation on a coach.

“We also tried to reach out to Gerard Houllier (former Liverpool and France coach) and I reached out to so many coaches and technical experts, and one name came to their fore and that was Gernot Rohr,” Pinnick said.

The NFF president also posited that it wasn’t an easy decision to convince the Franco-German coach from leaving his lucrative role in the German football federation.

“I remember someone said whether Rohr would want to leave the lucrative job he had with the German Federation, heading one of their technical groups, to come to Nigeria. He is a very comfortable coach.

“He has two hotels and he is very happy, even at a point he was going to coach Madagascar free of charge because his wife happens to come from Madagascar and I said I will pray over it and I believe he will come and that was when the journey began,” Pinnick concluded.

Abdulquadir Adedapo - May 5, 2019
ALL CATEGORIES
SOUNDCLOUD