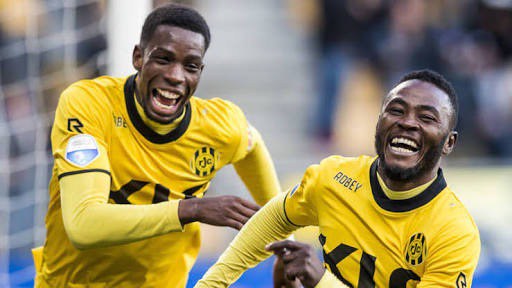 Former junior international Abduljelil Ajagun was in sparkling form for KV Kortrijk in their 4-1 thrashing of Waasland-Beveren in the Belgium Jupiler league at the weekend, AOIFootball.com reports.

The former Panathinaikos midfielder, who has been struggling in recent weeks, put that aside when he opened scoring just after 6 minutes to put the home side ahead.

Two minutes later, it was 2-0 when Idir Ouali scored the first of his two goals as Kortrijk went into the half with a comfortable 2-0 score line.

Just on the hour mark, Oudir got his brace and Kortrijk’s third when he converted after been setup by the impressive Ajagun, to put the game beyound the reach of Waasland-Beveren.

The visitors did however get a consolatory goal when Tuur Dierckx pulled one back but a late 4th from Teddy Chavallier in the 83rd minute sealed all three points.

The goal was Ajagun’s third of the season, with the result moving Kortrijk to 14th position with 17 points from 17 games.

AFCON game against Algeria remains my best for Nigeria- Collins