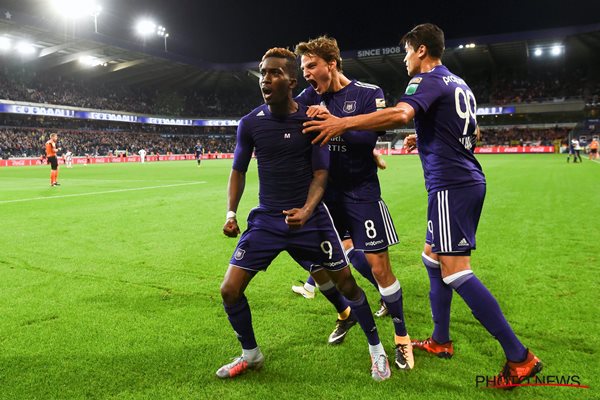 Super Eagles’ striker, Henry Onyekuru has said he is flattered by offers linking him with top European clubs like Barcelona and Manchester United, but wants to remain focused on his current team.

The striker, who spoke exclusively to AOIFootball.com after netting the winner for Anderlecht in their Jupiler league game at the weekend, said he will continue to work hard and improve on his game.

“There is no real secret, I have a strong faith in God and he has blessed me to be able to do what I love and I’m just focused on improving myself, working hard and staying dedicated.

“It’s a blessing to be recognized by these clubs and of course, it’s flattering but I take everything one step at a time; focus on what’s in front of me and for the next few months- that is Anderlecht,” Onyekuru said.

The 20-year-old striker also expressed his delight in scoring his eight goal of the season, saying it’s always a delight to score the winning goal for his team.

“It was a difficult match for us but I am happy we were able to win and I also got on the score sheet. I hope to continue scoring more goals for Anderlecht and hopefully, win a trophy or two in the season,” Onyekuru concluded.

The on-loan Everton striker has scored 10 goals in all competitions and remains a target of top European clubs because of his tenacity and composure in front of goal.

I’m honoured to be a mentor to younger players, says Mikel