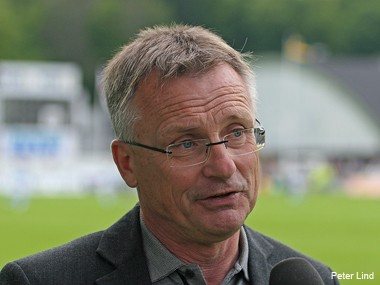 Former Super Eagles’ defender, Ifeanyi Udeze, is of the opinion that Iceland’s planned appointment of former Eagles’ assistant coach Roland Andersson should not bother the team and its technical crew, AOIFootball.com reports.

Udeze, who was part of the Super Eagles’ team to the 2002 Korea/Japan FIFA World Cup, made this assertion on Brila FM monitored by AOIFootball.com.

The former West Bromwich Albion left-back posited that Andersson’s imminent appointment will pose little or no threat to the Eagles’ quest of defeating the Strakanir Okkar (Our Boys).

According to Udeze, his knowledge of Nigeria are now obsolete and stale as most of the players then are no longer in the fray, apart from Mikel.

“Yes, Andersson may know a couple of things about Nigerian football, but all he knows are now obsolete as most of the players he worked with during the time of Lars Lagerback are no more in the team. All he knows now are merely from footages he has watched recently. The Eagles have evolved since then and so much has changed,” Udeze said.

Argentina, Iceland and Croatia are set to battle it out against Nigeria at the highly anticipated global showpiece in Russia next year.

The Super Eagles will face-off against Croatia in their opening game at Kaliningrad Stadium on June 16, face Iceland in their second game on June 22, and wrap up their group stage campaign against Argentina four days later.

Abiola Shodiya - May 7, 2017
ALL CATEGORIES
SOUNDCLOUD