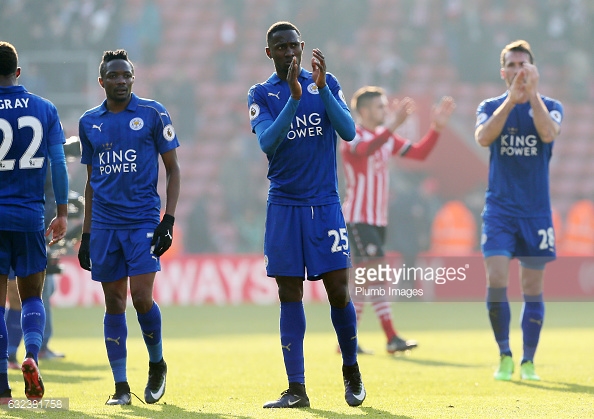 Nigerian international, Wilfred Ndidi saw red as former champions, Leicester City were beaten 3-0 by relegation threatened Crystal Palace at the King Power Stadium, ending their four-game winning run, AOIFootball.com reports.
Prior to this visit, Palace had failed to win and score in their last 10 Premier League away games this summer but goals from Benteke, Wilfried Zaha and Bakary Sako, saw off Leicester, who had Wilfred Ndidi sent-off for two bookings.
Andros Townsend did brilliantly to beat Ben Chilwell and curl a sublime ball into the middle which met its intended target as Benteke powered a header into the net and wheeled away, celebrating with his fingers in his ears.
Leicester looked short of ideas as Jamie Vardy and Riyad Mahrez struggled to find space.
Meanwhile, Zaha kept popping up in good positions and doubled Palace’s lead on the 40th minute when Benteke glided through the middle of the park before slipping in the winger, who finished in great style.
The Foxes improved after the break and thought they levelled when Vincent Iborra headed home from a free-kick but Referee Martin Atkinson ruled it out for a clear push. Seconds later, Leicester were down to 10-men when Ndidi was dismissed for a second yellow card for simulation.
The midfielder – on his 21st birthday – dribbled into the box but fell to the ground under no contact, which drew the second yellow from Atkinson’s pocket.
Despite showing a positive attitude with one man less, Leicester rarely troubled the Palace back-line and Palace had the final say when substitute Sako finished off a flowing counter attack in added time.
The Nigerian will now miss the Foxes’ quaterfinal Carabao Cup match against Leicester City on Wednesday, but will be back for their next weekend’s EPL match.