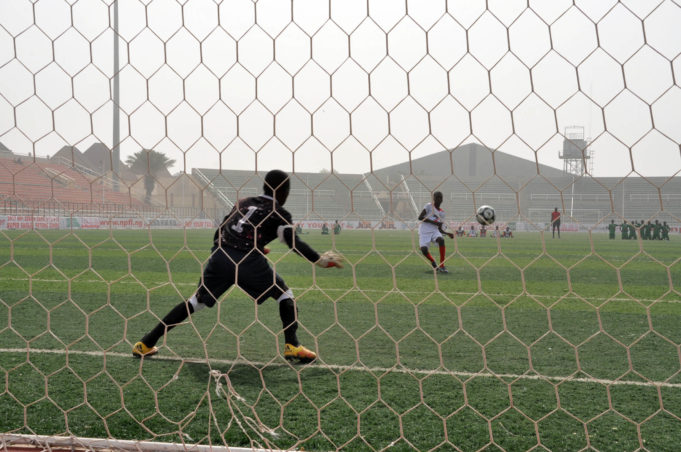 Former Super Eagles’ and Enyimba of Aba goalkeeper, Dele Aiyenugba, has taken to the social media to celebrate his 13-year-old son, Daniel Aiyenugba, who was the star at the final of the NFF Zenith Future Eagles U13 Tournament at the Sani Abacha Stadium, Kano, AOIFootball.com can report.

Daniel captained his team (North Central) as they defeated their opponents from the South West 4-2 on penalties after both teams failed to get past each other in regulation time.

Aiyenugba, who is nicknamed the ‘Cat’ for his impressive composure when it comes to penalty shootout, burst into limelight in 2003 when his penalty heroics took Enyimba to the final of the CAF Champions League where they edged out Egyptian side Ismaily before repeating the same feat a year later when Enyimba defeated Etoile du Sahel on penalties in the final in Abuja to clinch her second continental title.

The Eagles’ shot-stopper, who still hopes for a recall ahead of the World Cup, said he was not surprised by Daniel’s performance, because it runs in the family and his son has shown he can become a future Super Eagles’ player.

“I am happy for him (Daniel) and hopefully, he can replicate this kind of performance in the future and one day be in goal for the Super Eagles of Nigeria. It will be a proud moment for me and my family,” Dele said.

Daniel Aiyenugba and other players who excelled at the tournament will be closely monitored by the NFF as the football house looks to build a genuine and formidable U-17 team that every Nigerian and indeed, the world would be proud of.