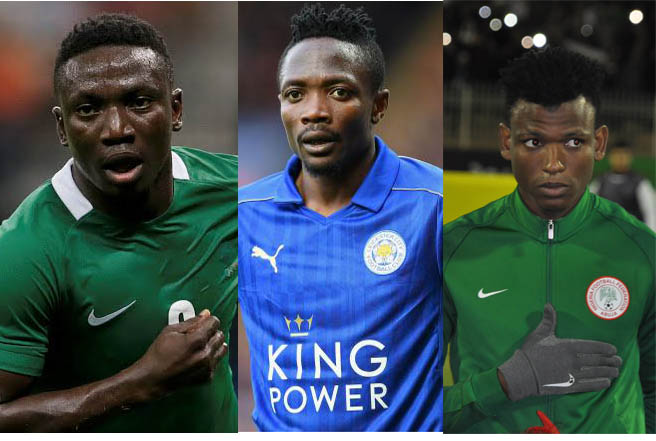 With the January transfer window less than 72 hours away from now, some Nigerian players are expected to join in the transfer train. AOIFootball.com looks at five Nigeria players who could change clubs in the coming days.

Oghenekharo Etebo: He is one Nigerian who will definitely be on the move this January. The Super Eagles’ midfielder is expected to join Portuguese giants FC Porto from CD Feirense in the coming days.

The Rio 2016 Olympic bronze medallist has been Feirense’s best player by a distance this season, scoring four times and his impressive display has been sported by the league leaders who are keen to add the Nigerian to boost their chances of winning the league.

Ahmed Musa: If there is any Nigerian currently waiting for the start of the transfer window, it has to be Super Eagles’ winger, Ahmed Musa who has been frozen out by Leicester this season.

The former CSKA Moscow man is expected to finalise a contract agreement with Stoke City in the next few days, as he looks to reignite his career and boost his chances of playing in the World Cup next year.

Shehu Abdullahi: The Super Eagles’ right-back is attracting offers the likes of Birmingham City, Trabzonspor and Freiburg who are looking to add the defender to their squad in January.

Abdullahi, who currently has six months left on his contract with Anorthosis Famagusta, could be sold in January by the club, so as not to lose one of their most priced assets for free in the summer.

Kelechi Iheanacho: The January window could be a now or never opportunity for the Super Eagles’ star to quit former Premier League champions, Leicester City, having failed to break into the first team.

Iheanacho, who arrived during last summer transfer window for a club record fee of around 25 million pounds from Manchester City, has failed to adapt with the Foxes’ style of play, playing second fiddle to Shinji Okazaki and Jamie Vardy.

The Nigerian has not featured for Leicester in any of their last eight EPL outings and should now be looking for a way out in January to boost his chances of making the Super Eagles’ World Cup squad.

Imoh Ezekiel: After been told his services are no longer needed by Turkish club, Konyaspor, the former U-23 striker is one man on the hunt for a new club during the transfer window.

Ezekiel left Konyaspor due to a breach of contract and is thought to be keen on a return to former club Standard Liege in Belgium. Belgian Champions Anderlecht are also pondering on securing the services of the Rio Olympics Bronze medalist. Clubs in the Middle East are also showing interest in the Nigerian.