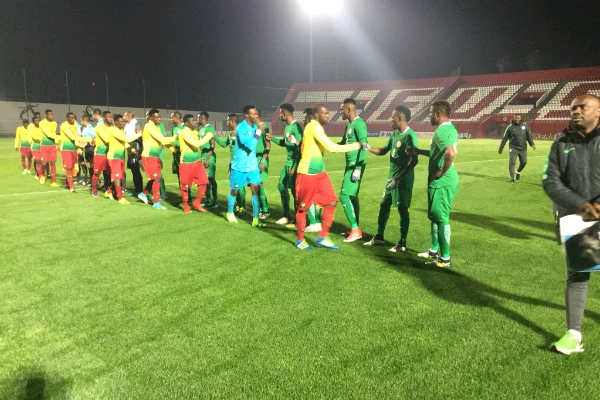 CHAN bound Nigeria’s Super Eagles and the Indomitable Lions of  Cameroon played a 0-0 draw in a tune-up game in Rabat, Morocco on Wednesday night ahead of the 2018 Africa Nations Championship (CHAN) taking place in Morocco, AOIFootball.com reports.

The game took place at the Moulay El Hassan Stadium in Rabat.

The Lions had the larger percentage of possession in the early stages part of the first half despite it being a cagey affair.

In the 23rd minute, Cameroon’s early edge in the game was almost rewarded but goalkeeper Ikechukwu Ezenwa made a brilliant one-on-one save after the Eagles defence was sliced open.

The Eagles gradually started getting back into the game and thought they had taken the lead on 40 minutes but Gabriel Okechukwu’s effort was flagged off for offside.

The second half saw the Eagles make a host of changes which with Ezenwa going off for Dele Ajiboye among the changes.

The second-half was not different as both teams found it difficult to break the deadlock.

And in the last minutes of the game Ajiboye made a finger tip save from a header off a corner to keep the score at 0-0.

The Eagles are in Group C alongside Rwanda, Equatorial Guinea and 2014 CHAN winners Libya.

Cameroon are in Group D with Angola, Burkina Faso and Congo.