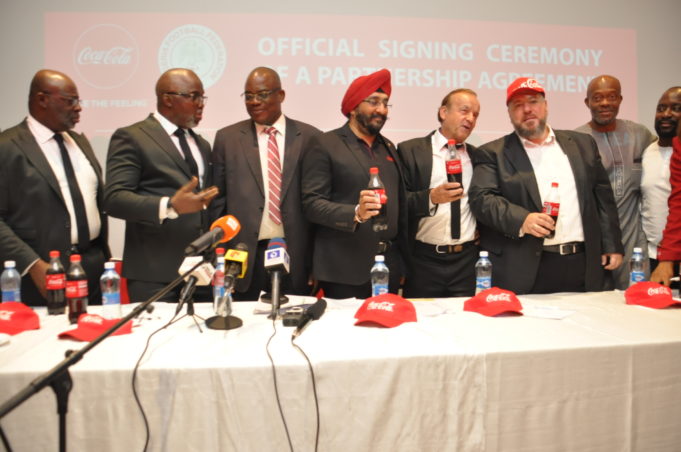 In its continuous efforts to make Nigeria football a marketable brand the Nigeria Football Federation (NFF) have signed a lucrative five years patnership agreement with soft drink giants Coca-Cola worth $4m AOIFootball.com can report.
Coca-Cola  will now officially soft drink partners of all the country’s national team.
The NFF made the announcement at the official signing ceremony held at the Eko Hotel and Suites, Victoria Island, Lagos on Wednesday.
Present at the ground breaking  ceremony were NFF President Amaju Pinnick, NFF Vice President and Chairman, League Management Company (LMC) Mallam Shehu Dikko, Super Eagles coach Gernot Rohr, reigning African footballer of the year Asisat Oshoala, Super Falcons defender Onome Ebi and top officials of Coca-Cola.
The deal is worth $4 million and will run for five years which will cover all the national teams across all ages and gender.
Coca-Cola who were one of the major sponsors of Nigeria football after sponsoring the now called Aiteo Cup in the past will now join a growing list of sponsors of the NFF.