Super Eagles’ attacker Henry Onyekuru is excited on the prospect of featuring for Premier League club, Everton before the end of the season after making a remarkable progress from the injury he sustained on-loan to Belgium side Anderlecht last December.

The former Aspire Academy player, who spoke to AOIFootball.com exclusively from his base in England, said his rehabilitation from the injury sustained has been going on smoothly and hopes to return to first team training soon.

“My recovery has been remarkable and the doctors have been observing my progress and have said if it continues like this, I should be running very soon.

“I am going to be patient and not rush myself too soon into training, but I am been optimistic of making my debut before the end of the season,” Onyekuru enthused.

Onyekuru, whose loan at Anderlecht expired in December, added that he was thankful for the opportunity at the club, but is now determined to win the heart of his new coach Sam Allardyce.

“Anderlecht was a great experience but I must now focus on working with Big Sam at Everton and other great players. Hopefully, I can continue to learn more and take my game to the next level.

“The team is now determined to challenge for European qualification and the signing of Theo Walcott from Arsenal will help improve our chances.”

The 20-year-old scored 9 goals for Anderlecht before injury ended his loan spell and has been with parent club Everton in the UK where he has been recuperating. 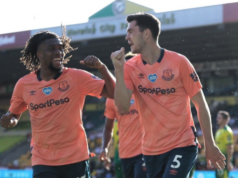