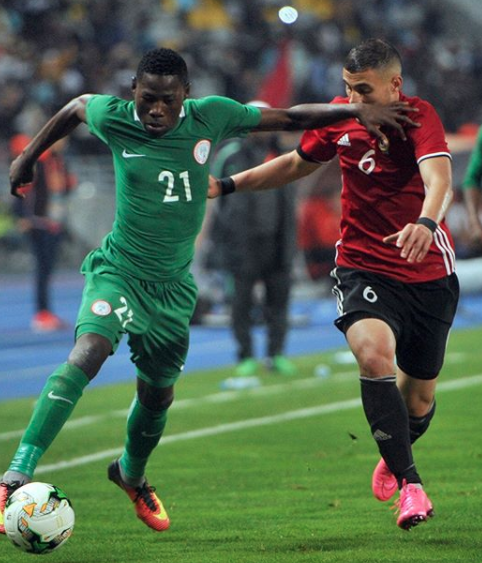 Nigeria left it late to beat Libya 1-0 in Group C of the African Nations Championship (CHAN) at the Stade Ibn Batouta in Tangier, Morocco on Friday, AOIFootball.com reports.
Both teams looked lively in the opening stages of the game as they searched for an early goal.
Nigeria dominated the first half in terms of possession and while Libya did their best to get forward, neither goalkeeper – both of whom were their team captains – had a serious saves to make.
The first chance of the second half fell to Ogbugh in the 55th minute as he headed a cross from Sunday Falaye straight at Libya goalkeeper, Muhammad Nashnoush.
Emeka Atuloma’s corner-kick was fired home by Sunday Faleye to make it 1-0 to Nigeria, much to the delight of the Super Eagles’ fans inside the stadium.
Libya were unable to find a late equalizer in the closing stages of the game and in the end, Nigeria secured a 1-0 win over the Mediterranean Knights.
The Eagles have four points from their two matches in the ongoing tournament.
Libya XI: Muhammad Nashnoush, Sanad Maoud, Ahmed El Trbi, Motasem Sabbou, Ahmed Al Maghasi, Mohamed Aleyat, Bader Ahmed, Abdulrahman Ramadhan khalleefah, Saleh Al Taher, Salem Ablo, Omar Aribi.
Nigeria XI: Ikechukwu Ezenwa, Osas Okoro, Daniel Itodo, Stephen Eze, Kalu Orji, Emeka Atuloma, Ifeanyi Ifeanyi, Rabiu Ali, Emeka Ogbugh, Anthony Okpotu, Sunday Faleye.

Moses happy to be fit again