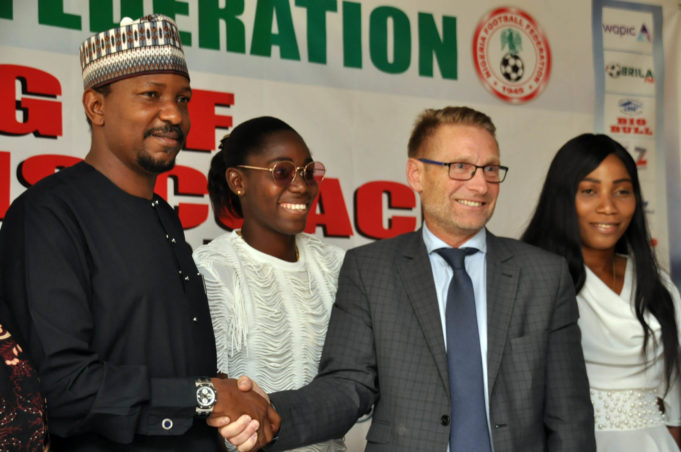 New Coach of Nigeria’s Super Falcons, Thomas Dennerby, has said his job is to guide the African champions to become world beaters.

The Swedish tactician, who spoke during his official unveiling ceremony in Abuja, after signing a contract last week, said he was excited to be in Nigeria and is ready for the challenges ahead.

“I will be placing a serious demand on the players to give their best in training,  physical fitness and in every competition. My philosophy is to develop the players and to work with the backroom staff.”

The contract will also enable the new coach to come into the job with an assistant, Mr. Jorgen Petersson, another highly experienced Swedish coach which was picked by Dennerby himself.

Presenting the new coach earlier, President of Nigeria Football Federation NFF, Mr. Amaju Pinnick, who was represented by the Federation’s 2nd Vice President, Mallam Shehu Dikko, expressed delight, whilst saying that the reason the Glass House hired a coach of Thomas Bennerby’s calibre was they have seen his results and want to conquer the world.

“Undoubtedly, we’re doing well in the continent of Africa but our thirst to conquer the world made us to go for a man like Mr Thomas Dennerby. He is undoubtedly amongst the top five best coaches in the world; as a federation, we will accord him all needed support to succeed.

“It’s our belief that we have the right man, and it is our belief also that, we will succeed in our quest and we are going to support him to succeed,” said Dikko

Present at the ceremony was, Scribe of the  NFF, Dr Mohammed Sanusi, Head of NFF Committee on Women’s  Football, Hon. Ayo Omidiran, Super Falcons striker, Asisat Oshoala, amongst other dignitaries.