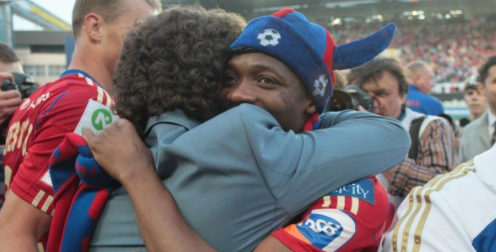 Nigerian International Ahmed Musa has re-signed for CSKA Moscow from Leicester City on loan until the end of the season.
AOIFootball.com had reported that a deal had been agreed between the clubs earlier this week after the 25-year-old Nigeria international forward found opportunities limited at the King Power Stadium.
Musa joined Leicester from the Russian side for a club-record fee of £16m just 18 months ago, but has made only 18 appearances and scored two goals.
CSKA confirmed Musa’s arrival on their official Twitter handle and website on Tuesday.
“PFC CSKA and Leicester City agreed the loan of Ahmed Musa today until the end of 2017/18 season,” the Russian Premier League club announced.
“Ahmed will be included in the Red-Blues’ squad list for the national league and the UEFA Europa League knockout stage. Welcome back, Ahmed.”
The Nigerian spoke to the club website expressing his happiness on returning to the Russian Capital.
“I am very happy and proud to be back. This is truly my home; they are champions that fight for the top awards and occupy highest places. I am back to the red-blue family!,” CSKA quoted Musa on their verified Twitter handle.
During his first spell with CSKA, he made 125 appearances, scoring 42 goals.
Meanwhile Musa has been handed the No. 7 jersey, this is a different number from the one he wore in his first spell at CSKA. He wore the No. 18 jersey  in his first time at the Moscow club. The No 7 shirt has been vacant since Zoran Tošić left the club.
He also won three Russian top flight league titles (2013, 2014, 2016), one Russian Cup (2013) and two Russian Super Cup titles (2013, 2014

Simon delighted to be back after injury lay-off